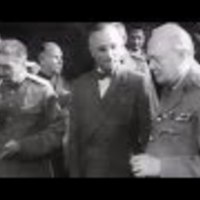 President Harry S. Truman, Prime Minister Winston Churchill, and Josef Stalin meet at Potsdam (near Berlin). The meeting was originally called the "Berlin Conference," the name was later changed to the "Potsdam Conference." From a "United News" newsreel produced by the US Office of War Information.

Public domain film from the US National Archives, slightly cropped to remove uneven edges, with the aspect ratio corrected, and mild video noise reduction applied.
The soundtrack was also processed with volume normalization, noise reduction, clipping reduction, and/or equalization (the resulting sound, though not perfect, is far less noisy than the original).

The Potsdam Conference was held at Cecilienhof, the home of Crown Prince Wilhelm Hohenzollern, in Potsdam, occupied Germany, from 17 July to 2 August 1945. (In some older documents it is also referred to as the Berlin Conference of the Three Heads of Government of the USSR, USA and UK ) Participants were the Soviet Union, the United Kingdom and the United States. The three powers were represented by Communist Party General Secretary Joseph Stalin, Prime Ministers Winston Churchill, and, later, Clement Attlee, and President Harry S. Truman.

Stalin, Churchill, and Truman—as well as Attlee, who participated alongside Churchill while awaiting the outcome of the 1945 general election, and then replaced Churchill as Prime Minister after the Labour Party's defeat of the Conservatives—gathered to decide how to administer punishment to the defeated Nazi Germany, which had agreed to unconditional surrender nine weeks earlier, on 8 May (V-E Day). The goals of the conference also included the establishment of post-war order, peace treaties issues, and countering the effects of the war...

Relationships amongst the leaders

In the five months since the Yalta Conference, a number of changes had taken place which would greatly affect the relationships between the leaders.

1. The Soviet Union was occupying Central and Eastern Europe
By July, the Red Army effectively controlled the Baltic states, Poland, Czechoslovakia, Hungary, Bulgaria and Romania, and refugees were fleeing out of these countries fearing a Stalinist take-over. Stalin had set up a communist government in Poland. He insisted that his control of Eastern Europe was a defensive measure against possible future attacks and believed that it was a legitimate sphere of Soviet influence.

2. Britain had a new Prime Minister
The results of the British election became known during the conference. As a result of the Labour Party victory over the Conservative Party the leadership changed hands. Consequently, British Prime Minister Clement Attlee assumed leadership following Winston Churchill, whose Soviet policy since the early 1940s had differed considerably from former US President Roosevelt's, with Churchill believing Stalin to be a "devil"-like tyrant leading a vile system.

3. America had a new President, and the war was ending
President Roosevelt died on 12 April 1945, and Vice-President Harry Truman assumed the presidency; his succession saw VE Day (Victory in Europe) within a month and VJ Day (Victory in Japan) on the horizon. During the war and in the name of Allied unity, Roosevelt had brushed off warnings of a potential domination by a Stalin dictatorship in part of Europe. He explained that "I just have a hunch that Stalin is not that kind of a man" and reasoned "I think that if I give him everything I possibly can and ask for nothing from him in return, noblesse oblige, he won't try to annex anything and will work with me for a world of democracy and peace...