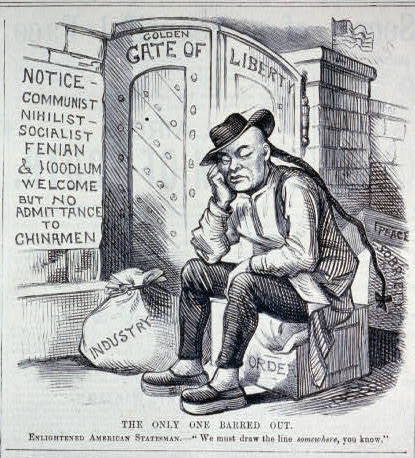 Political cartoon from 1882 showing a Chinese man denied entrance to the United States of America due to the Chinese Exclusion Act, one of the first examples of national immigration legislation on a mass scale.

The examination of legislation and litigation of immigration in the western United States during the 1920s and 1930s is imperative to better understanding the big picture impacts of migration in the early twentieth century. This page focuses on three aspects of immigration law. First, the legislation itself and how lawmakers attempted to both prohibit and allow immigrants into the country and into the western United States in particular. Second, the litigation that provided a space for this legislation to be tried and appealed. Third, the impact of western U.S. immigration laws on actual residents around the turn of the century. In particular, there is a special interest placed upon the Alien Land Laws in Washington State, as this local legislation gives good insight as to how immigration tensions on the national level funneled into the local level. 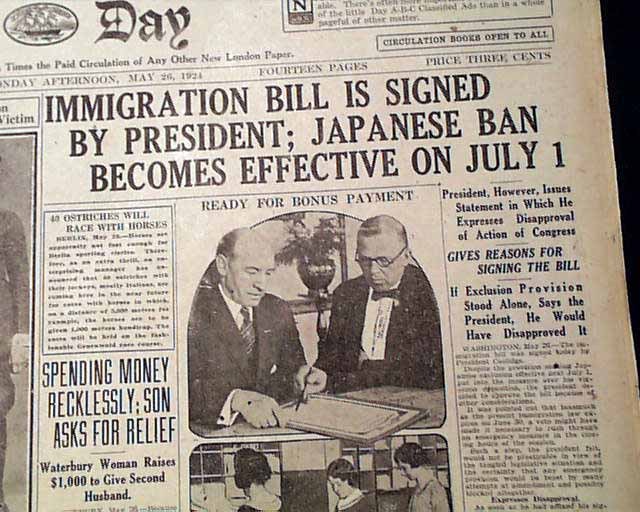 President Coolidge signs the Immigration Act of 1924 (otherwise known as the Johnson-Reed Act) into law, effectively prohibiting masses of non-white immigrants to the United States.

In the early twentieth century, immigration to the United States experienced a spike. Asian migration to the western United States increased in particular. As Chinese, Japanese, and other Asian peoples began to move to the United States in search of jobs, many white Americans began to feel that these so-called intruders were threatening their way of life. As such, a defense of this ‘white man’s country’ began, during which time white Americans utilized legislation as one way to preserve their Anglo-American civilization. [1] Because Asians were immigrating to the United States in larger numbers than any other nationality in the 1910s and 1920s, laws were created to specifically target them. [2] Prior to the twentieth century, lawmakers had experienced success with the Chinese Exclusion Act of 1982. [3] Exclusion was expanded with the 1924 Johnson-Reed Act to exclude not only Chinese immigrants but Japanese, Indian, and other Asians from the path to citizenship based on their alleged racial ineligibility. [4] More locally, in 1921, Washington State passed the Alien Land Law. This law restricted land sales to ‘illegal aliens’. At this point, Asians were the only group who were restricted from becoming citizens, and this law directly targeted them. [5] The 1921 law was not the first Alien Land Law passed in Washington. In 1864, the first Alien Land Law was passed- looking very different. This early iteration was meant to displace Native Americans by offering immigrants the ability to purchase land. Over time, the state became increasingly populated, and the laws began to shift in response. The 1921 Alien Land Law was brought to legislators by the Anti-Japanese League of Washington and impacted Japanese immigrants particularly. [6] The driving force behind the law was the fear that the country’s whiteness was in jeopardy. 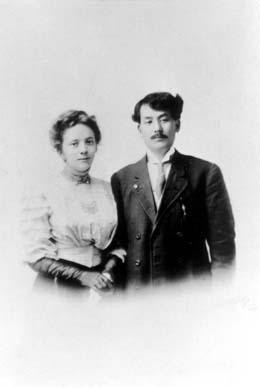 Helen Gladys (Emery) Aoki and Gunjiro Aoki, in March of 1909. The interracial couple had to travel from San Francisco to Seattle in order to be married.

As time passed, negative sentiment began to extend beyond Asian migrants to encompass all people moving into the United States who were not from traditionally white European countries. This suspicion directly stemmed from the threat that an overwhelming amount of white Americans in the Pacific Northwest had begun to be concerned with. As Ernest Crawford wrote in the Everett Labor Journal, “men on both sides of the international line feel that the continent of North America is intended to offer the largest democratic development to white men on earth.” [7] The courts provided a venue for much of this tension to play out, as is obvious from the cases that were tried in the early twentieth century. Shortly after the Alien Land Law of 1921 was passed, its constitutionality was called into question. Frank Terrace argued in Terrace et al. v. Thompson, Attorney General of Washington that the Alien Land Law of 1921 violated a major treaty between the U.S. and Japan in addition to unlawfully taking land from its owners and violating both state and federal constitutions. [8] Terrace lost on a national level, as the case progressed all the way to the Supreme Court before the law was found constitutional. On an individual level, immigrants fared no better. Two of the most important immigration cases of the early twentieth century were Takao Ozawa v. U.S. (1922) and U.S. v. Bhagat Signh Thind (1923). [9] Unfortunately, the courts ruled against both men, powerfully establishing precedents of neither Asian Indians nor Japanese as eligible for U.S. citizenship. The ramifications of these decisions were powerful, and this standard remained in place for several decades.

Socially, both immigrants and native-born citizens had difficulties coping with the adjustments they had to make. For immigrants, transitioning into a largely unwelcoming new environment proved incredibly difficult and even more so when they also faced laws, rules, and regulations that were being put in place to keep them out and make it more difficult than ever to become citizens. One example of trouble faced during this time came when Gunjiro Aoki wished to marry Gladys Emery in San Francisco in 1909. [10] Marriage between whites and Asians at this time was illegal in California. The couple was forced to go to Seattle to be married, and when they were, Emery had her United States citizenship revoked for her choice to marry an alien. It was not until Aoki’s death in 1933 that Emery was allowed to regain citizenship in her native country. American-born citizens also had difficulty coping with the influx of new people to the country, and were wary of immigrants taking their jobs. This was especially true in the Pacific Northwest, where many new immigrants took up work in canneries and other Pacific-based companies. In 1907 in Bellingham, WA and Vancouver, B.C. tensions between the groups came to a head, as upheavals swept the boarder towns and had to be quelled. [11] While it was certainly possible for the groups to co-exist peacefully, it would not be until further into the twentieth century that this peace was finally achieved.

While the tension between new immigrants and white Americans concerned with the status quo being interrupted played out in various different arenas, they all came back to the laws and regulations that were being put in place and removed at the same time. As the western United States struggled with the question of who should be eligible for citizenship, there were secondary battles occurring at the same time, attempting to answer questions like what rights should immigrants be afforded. Time and time again, the question of whiteness came up in the conversations of immigration and citizenship. What an individual had to offer the United States seemed to matter less to many native-born white Americans than what color skin they had. Racial and ethnic tension between groups continued to brew as the years wore on. The Great Depression only fueled the conflict between the citizens and immigrants, as precious jobs led to a fierce protection of American citizenship. Many Americans viewed their citizenship as a priceless commodity, one that should only be shared with those who shared their skin color as well. As the region underwent different struggles, the laws changed to accommodate these struggles, amending and adjusting to fit the country’s needs. Despite the discrimination that they often faced, immigrants to the United States remained incredibly hopeful that equality and citizenship would one day be afforded to them. It was this hope, and their devoted commitment to it, that eventually began to incite change- socially, culturally, as well as within the legal sphere.

[5] Chang, Kornel. Enforcing Transnational White Solidarity: Asian Migration and the Formation of the U.S.-Canadian Boundary. In the American Quarterly, Vol. 60, No. 3, Nationa and Migration Past and Future (Sep., 2008). 671-696. The Johns Hopkins University Press.

[11] Molina, Natalia. How Race is Made in America: Immigration, Citizenship, and the Historical Power of Racial Scripts. Berkley: University of California Press, 2014. 6.