“All I do is to supply a public demand … somebody had to throw some liquor on that thirst. Why not me?" [1].  Al Capone was a young man at the time looking to make some money for himself in order to have a life. When you know the right people, you become involved with the certain groups that have the connections for you to get what shall be acquired in your eyes. Capone had to construct some sort of way in order to gain power, but primarily, make enough money for himself. He had many different aspects that he needed to incorporate into his illegal production of alcohol, the distribution process following the production, and making even more money from his sales.

Capone knew lots of people at such a young age, which allowed for him to access the resources necessary for his business plans. It truly pays to be an Italian. Capone had delivery trucks distributing the boos all over town, the salespeople roaming the streets of Chicago marking up a price, the evolution of the speakeasies blossomed, and just as a candle on top of the cake, he incorporated heavily armed bodyguards for certain levels of protection on his investments. For Al Capone, having profits of such high magnitude weren’t particularly shocking for him because he expected the boom to blow immediately. He took over thousands of distilleries and breweries all over the nation, and for him, having numbers in your corner were a very large advantage in the business enterprise. Prohibition was being ratified and Capone was literally being handed a monopoly on a silver platter.

With profits pouring in like the Niagara Falls, Capone had the need to want to, “construct more speakeasies, gambling joints, whorehouses, breweries, and distilleries within the city, and even in the suburbs of Chicago” [2]. We can’t forget that Capone paid off the law enforcement in order to ensure that he wasn’t going to be getting into any legal troubles. But with great ideas, there always comes competition within a certain amount of time. Capone was able to grow as a man, and a businessman over a period of time, but as the money caught up to him, he began to get into some legal trouble. He was arrested in the year of 1931, and locked up and sentenced for up to 11 years, with the ability of early release if good behavior permitted. Al Capone, although he was still incarcerated for such a long period of time, still stayed close to his family, as he continuously wrote his mother while he stayed locked up. One of the letters he wrote to his mother in order to keep such a long-lasting bond was on Christmas day. He wrote to his mother expressing his love and gratitude to the family during such hardships being encountered at the moment. is just destiny. 5 organized crime families were created from all the corroboration amongst the cities and towns interested in the profits from prohibition. The families were the Bonnanos, the Gambinos, the Genoveses, the Colombos, and the Luccheses. All of them were started by iconic Italian figure during this time such as Tommy Lucchese, Vito Genovese, Carlo Gambino, Joseph Profaci, and Joseph Bonanno. One of the largest unintended consequences of prohibition was the riots of Portland in 1855. President Hoover referenced it to be the “noble experiment.” There were some casualties throughout the riots from egotistical individuals that thought they could break through the front door and try attacking the police. Some were just “instantly gunned down by a wave of firings” [3].

Economically, there were many unintended consequences due to prohibition that greatly affected business and their statuses.  For example, all over the nation, there were “restaurants failed, as they couldn’t without legal liquor sales” [4]. Breweries, distilleries, truck drivers, salespersons, all specified individuals lost their occuopations unintendedly due to prohibition. The federal government went into federal debt of over $11Billion dollars due to prohibition and the governemental regulations being broken and unorganized. People, specifically the government, were relying on income tax in order for certain credentials to be paid for, but with the effects of prohibition in place and what it was doing to the economy, such actions simply couldn’t take place. “While the Eighteenth Amendment prohibited the manufacture, sale and transportation of intoxicating beverages, it did not outlaw the possession or consumption of alcohol in the United States.

The Volstead Act, the federal law that provided for the enforcement of Prohibition, also left enough loopholes and quirks that it opened the door to myriad schemes to evade the dry mandate” [5].  As seen as one of the greatest unintended consequences of prohibition, “the solution the United States had devised to address the problem of alcohol abuse had instead made the problem even worse. The statistics of the period are notoriously unreliable, but it is very clear that in many parts of the United States more people were drinking, and people were drinking more” [6]. Alcohol abuse became a nationwide problem that could not be avoided at all because of how well the distribution was laid out. Approaching Al Capone's death, fingerprints were taken in order to be filed and recorded for any future purposes, which are displayed above. 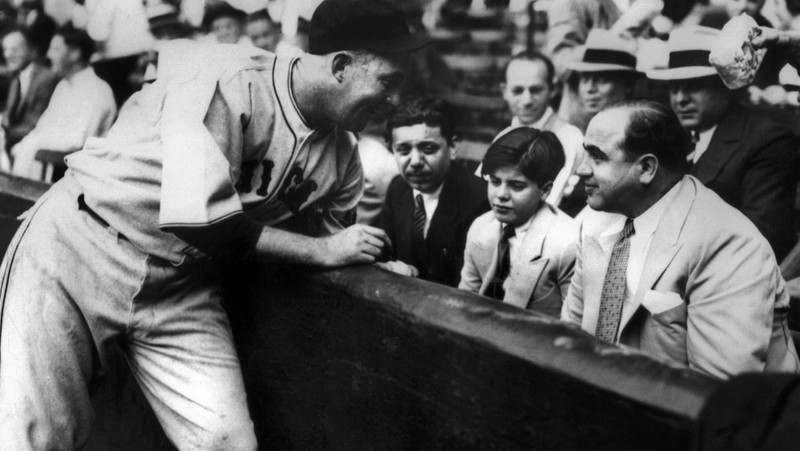 Nobody in the historical mindset can forget about the St. Valentine’s Day Massacre that Capone was very much so involved in.  Around and “by early 1929 Capone dominated the illegal liquor trade in Chicago. But other racketeers vied for a piece of the profitable bootlegging business, and among them was Capone’s long-time rival “Bugs” Moran. Moran had previously tried to assassinate both Torrio and Capone, and now he was after Capone’s top hit man, “Machine Gun” Jack McGurn. Capone and McGurn decided to kill Moran. On February 14, 1929, posing as police, McGurn’s gunmen assassinated seven of Moran’s men in cold blood in a North Side garage. Alerted to the danger as he approached the garage, Bugs Moran escaped the slaughter. Although Capone was staying at his Miami home at the time, the public and the media immediately blamed him for the massacre. He was dubbed “Public Enemy Number One.”” [7] “On October 18, 1931, Capone was convicted after trial and on November 24, was sentenced to eleven years in federal prison, fined $50,000 and charged $7,692 for court costs, in addition to $215,000 plus interest due on back taxes. The six-month contempt of court sentence was to be served concurrently” [8] In the New York Times articles and in the trial, the "jury found him guilty on two misdemeanors and three felonies"[9].  Al Capone passed away on the day of January 25th, 1947 of a cardiac arrest, along with complications of syphilis and pneumonia.