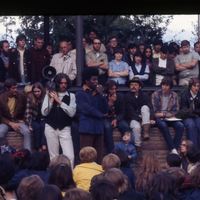 This exhibit highlights student protests at Washington State University (WSU) during 1969 and 1970. These protests were characteristic of other protests occuring on American campuses during this time period. At WSU, the flashpoint occured in May 1970, when students staged two large protests. The first was a one-day sit in at the French Administration Building (French Ad) to protest US military operations in Cambodia and the killing of student protesters at Kent State University. The second was a separate protest from May 24-June 1 in response to both a need for greater diversity in curriculum and faculty, and to arrests protestors believed to be racially based.