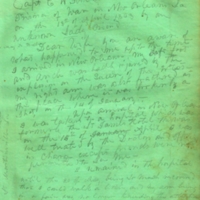 Fuller opens letter 1 describing to his wife, Mary, how he got captured by the Union upon the explosion of his ship, the Queen of the West, on April 15th, 1863. Fuller also describes what it was like being a patient at a hospital that was formerly St. James Hotel in New Orleans. In addition, he writes to his wife about the Custom House, a military prison, where he is reunited with Captain John Atkinson, a previous acquaintance.

Dear Wife you are aware of what happened to me up to the time I arrived in New Orleans. My left foot and ancle was badly injured by the explosion on the Queen of the West. My right arm was also fractured at the place where it was broken by a shot on the 14 of January.

Upon arrival in New Orleans I was taken to a hospital which was formerly the St James Hotel, this was on the 15th of April, I was well treated by the Doctors and Officers in charge except friends were not permitted to see me.

I remained in the hospital until the 20 of May being so much recovered that I could walk a little and my arm being in a fair way no longer kneeding the attention of a Surgeon, I was removed to the Custom House which was a military prison here I found Capt John Atkinson and two or three others whom I was acquainted with. I also found about 3 other