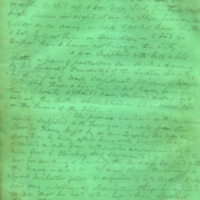 Fuller continues letter 1 writing about being sick for a week with a fever and describes what he was given at the Custom House by Mrs. Brooks, Presidentess of the Ladies Society for the relief of needy Confederate prisoners of war: a bed, bed clothes, a pair of pants, some shirts and under garments. He also tells Mary that Mr. Brooks knows her and all about himself.

officers that had been captured at different places. The next day after my arrival at that prison I was taken sick and was soon unable to sit up. I was very sick for two weeks high fever for eight days my skin became as yellow as an orange, or [brass?]. I do not know whether I had Yellow Fever or Jaundice. I had no doctor those I know not being in the City.

I was supplied with bed & bed clothes, a pair of pantaloons, some shirts & drawers by Mrs Brandt, Presidentess of the Ladies Society for the relief of needy Confederate prisoners of War. God bless [them & her?], had it not have been for their Charity, I should have suffered indeed, as I had only the clothes which I had on when blown up on The Queen of the West.

The prisoners confined with me were daily supplied with two good meals from the Brooks House kept by a Mr Brooks this was a donation by him, after being sick several days I received a note from Mrs Brooks accompanied by a nice bowl of Chicken Soup. She requested me to send to her for anything I kneeded, this kindness coupled with the name, iinduced me to direct the Servant a Smart Milatto fellow, to inquire of Mrs Brooks if she had any relations at Marietta Ohio, he replied to me that he had often heard them speak of [illegible] Harmer, the servant bore my message to Mr Brooks, who replied that he knew [you?] and all [about?] me that I must come and stay a few days with him and he would talk with