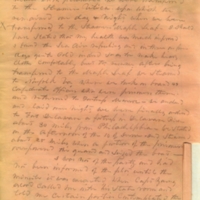 Fuller continues letter 2 talking about being transferred to the Steamer Utica for a day and a night before transferring to the Steamer Maple Leaf. They traveled to Norfolk, VA where they gained 49 more Confederate officers as prisoners and returned to Fortress Monroe. The next day, June 10th, they were ordered to Fort Delaware. He begins telling the story of an incident in which some of the prisoners overpowered the guard and took control of the boat, but Fuller wasn't among this party.

River emties, this seemed to indicate that we were to be exchanged and filled every heart with pleasure. We were transferred to the Steamer Utica upon which we remained one day & night, when we were transferred, to the Steamer Maple Leaf. I should have stated that my health was much improved I found the Sea Air refreshing and in three or four days quite cold indeed so as too make heavy clothes comfortable, but to resume, after being transferred to the Maple Leaf we steamed to Norfolk Va, where we took on board 49 Confederate Officers who were prisoners there, and returned to Fortress Monroe. We anchored and laid over night, we were finally ordered to Fort Delaware a fortress in Delaware River about 30 miles from Philadelphia. We started on the afternoon of the 10 of June and steamed about 25 miles, when a portion of the prisoners overpowered the guard and seized the boat.

I was not of the party and had not been informed of the plan, until the minute it was executed, when Capt [Young Blood] called me into his state room and told me certain parties contemplated the movement, declaring his opposition to it and requested me to speak to some of them on the subject, while he was talking --