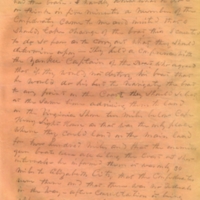 Fuller continues letter 2 telling his wife, Mary, that the Confederate prisoners indeed had control over the vessel. A group of the Confederates insisted Fuller take charge of the boat, which he did. The prisoners met with the Captain and agreed that the boat would remain intact if he would navigate it to shore.

[Transcript]
we heard a [rush?] and the affair was done, the Confederates had overpowered the guard and had the boat. I hardly knew what to do, or think in five minutes a number of the Confederates, came to me and insisted that I should take charge of the boat, this I consented to do, so far as to carry out what they should determine upon, - They held a conference with the Yankee Captain of the Boat, who agreed that if they would not destroy his boat that he would do his best to navigate the boat to any point on the Coast they should select at the same time advising them to land on the Virginia Shore ten miles below Cape Henry Light House, as that was the only place where they could land on the main land for two hundred miles and that the enemies gun boats were all a long the Coast at [short?] intervals, he informed them it was only 30 miles to Elizabeth City that the Confederates were there and that there was no Federals in the way- after consultation it being apparent that the boat had no provisions or coal for more than two days if for so long they concluded to adopt the