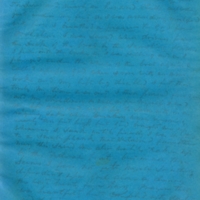 Fuller continues letter 3 by reflecting on his capture, as he was wounded during the loss of the Queen of the West, believing that he survived through prayer and God's intervention.

seven or eight thousand shots were fired at me. I escaped, again when I was blown up on the Queen of the West, five hundred pounds of gun powder and nearly an hundred shells exploding just under my feet, as I was ascending enveloped with fire I breathed a prayer to God for Protection. I was saved, when driven from the deck of the boat by the scorching flames I fell into the lake as I was falling and as I plunged under the Wheel of the boat again I called [out upon?] God, when I rose with an arm broke and my left leg disabled, I felt that truly my time was out, I then prayed for you and my children, as well as for myself I had my left arm and right leg to swim with in a raging lake where breakers were running nearly ten feet high but God brought me up whenever I sank until finally I was drifted to a small plank that sustained four other men, this saved me also, until taken up by the Federal boats but in all these scenes I have not felt myself so utterly dependent upon God alone as during the last twenty four hours. Prayer that was heartfelt, but coupled with doubt and despair was the outpouring of my heart. Sometime this morning probably about ten oclock, I was conducted to another room- where two poor fellows