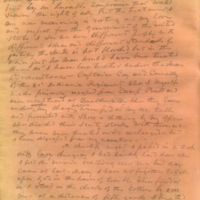 Fuller continues letter 3 describing his poor living conditions and contrasts his treatment with his care of a prisoner, Union Captain Cox of the 21st Indiana Regiment. He also refers to his faith in God.

even while writheing with the pain of wounds received from Union bullets, hoped that the Union would yet be reestablished, not by force but by an honorable compromise that would secure the rights of all, but the treatment I am now receiving is rooting out my love and respect for the Government of the United States, I see we are different people, with different ideas and different Standards of justice, the South is hot blooded, but in the main just, no man would have been treated there as I have been treated under the same circumstances. Captain Cox, and Connally of the 21st Indiana Regiment, who I myself made prisoners, escaped from Camp Pratt and were recaptured at Donaldsonville, when they came under my charge again, were fed at my own table and furnished with shoes & clothing by my officers who divided their scanty stock with them and they were well treated until exchanged, but I have digressed from my narrative - -

A cheerless night, I passed in a dark and lousy dungeon, I had hardly laid down when I felt the vermin cralling over me, but day came at last. Mary I have not forgotten to call upon God in the hour of trouble, when fired at as I stood on the deck of the Cotton by 2500 men at a distance of fifty yards, I breathed a prayer for protection. The balls were all turned aside but the three that struck my arms, although altogether