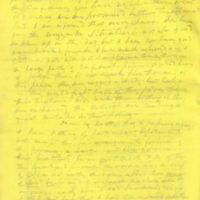 Fuller continues letter 4 describing the small rations in detail, as well as the generally poor conditions. He says conditions were better where he was held at the Fort, but he prefers having company. Another party of Confederate prisoners arrived; he estimates a total number of prisoners to be 5,000.

soldiers, two small crackers & about two ounces of meat, for dinner & supper, about the same for breakfast- my God talk of short rations in the Confederacy you have no idea there what it means, we are promised better treatment but I am informed that every change has been for the worse. My situation is not so good as when up in the Fort, but I have company good warm hearted friends I feel much relieved & if I continue well will not complain. This afternoon a large party of Confederate prisoners arrived here I judge there is now nearly five thousand at this place they are ragged & dirty but look as if they would fight well if they had a chance. Their treatment will make them bitter, if they are exchanged, the Federals are making a great mistake in their policy.

June 16, another day is passing away- I have nothing of particular importance to note except the bad arrangements for feeding the prisoners, a large part will not receive their breakfast, before one O clock P.M. if then. The breakfast furnished the officers was a cup of coffee not worthy the name about two ounces of salt beef and two small crackers, about an ounce each, when I had swallowed mine I did not feel that I had commenced, whether this is the supply furnished by the government or our allowance is reduced by some peculation [illegible word] I do not know-