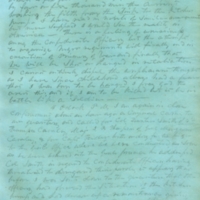 Fuller continues letter 4 by describing the poor cooking conditions. Fuller talks about officers possibly getting shot or hanged; he then refers to a childhood premonition of being hanged. At 4:00, a corporal summoned Colonel Banter Smith of 4th Tennessee Calvary, Major J.B. Thompson of General Morgan's Calvary and Captain Fuller to the General's office.

I hope for the honor of the Government it is the latter, gnawing hunger is our companion, another abuse is that the water for cooking is taken within a few feet say 40 or 50, of the necessary used by four or five thousand men, the current washing the filth from the Sink to the kitchen pump. I have read in novels of similar arrangements but never supposed I would see the reality in America- There is a feeling of uneasiness among the Confederate Officers, lest the attempt to organize negro regiments will finally end in execution of Prisoners of War and finally that We Will be Shot or hanged in retaliation I cannot entirely dispel the unpleasant thought as I have since childhood always had a fear that I was born to be hanged I pray God to avert this and if I am to be killed but let it be in battle like a soldier.

4 Oclock P.M. I am again in close confinement, about an hour ago a Corporal came to our quarters, and called for Col Banter Smith of 4th Tennessee Cavalry, Maj. J. B. Thompson of Genl Morgans Cavalry, & for Capt Fuller, with orders for us to go the Genls office where we were conducted, as soon as we were ushered into the Genls presence he addressed Col Smith in regard to Confederate officers having threatened to disregard their parole, it appears that before I was sent down to the quarters that the officers had observed the situation [of?] the kitchen pump, and had drawn up a remonstrance giving notice of withdrawal of Parole unless the evil was remedied but they finally concluded not to send the remonstration & tore up the paper