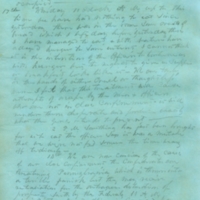 Fuller concludes letter 4 stating that the General ordered them to close confinement. They aren't given food, and he thinks such conditions will encourage other officers to attempt escape. They're finally fed and the Union officer explains the delay as a mistake. Fuller learns the reason behind being in close confinement is the threat from the Confederacy to attack Pennsylvania.

The Genl construed this as showing a bad spirit and ordered us into close confinement, we are again in the same room I last occupied.

17th
Wednesday 11 Oclock A.M. up to this time we have had nothing to eat since yesterday, there was in the room some crusts of bread which I left day before yesterday these I have managed to eat, & with water have allayed hunger to some extent, I cannot think it is the intention of the Officers to torture us with hunger but the neglect to give us supper or breakfast looks like it. We are truly in the hands of either cruel or thoughtless men. I feel that this treatment will cause attempts of escape by the men & officers who are not in close confinement. It will render them desperate and produce exactly what the Genl intends to prevent.

2 P.M. something has just been brought for us to eat, the officer says it was a mistake that we were not fed sooner the time wears off tediously.

18th
We are now conscious of the cause of our close confinement, the Confederates are threatening Pennsylvania, which is thrown into a terrible panick lest they may receive retaliation for the outrageous destruction of property [South?] by the Federals, 11 A.M. Maj Barton Second Officer in command has just called in to see us and to inquire the cause of our close confinement, we informed him what we knew, he promises that we shall be returned to our companions.