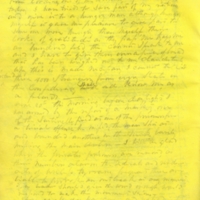 Fuller concludes letter 5 stating discipline has gotten worse. He also mentions that he's saving parts of his rations for the more hungry prisoners. He reports of a sentinel firing his musket at a prisoner for a trivial offense, missing his target and hitting another prisoner in the neck. He mentions that they have a hard time getting news, and are not allowed to received even Yankee papers.

The evening has arrived the discipline has been made more rigorous, I was prohibited from looking out of the window, yesterday and today I have tried to save part of my rations and give it to a hungry man, although hungry myself it gave me pleasure to give part to some one more hungry than myself, their looks of gratitude as they pass me pays me an hundred fold, they cannot speak to me and I have to give them even a piece of bread that has been weighed out to me clandestinely. Why this is made necessary I cannot tell I intend these 4000 strangers from every state in the Confederacy, shall all know me as a friend.

June 20th
This morning before daylight I was aroused by the report of a musket, one of the Sentinells fired at one of the prisoners for a trivial offense, he missed the man shot at and wounded another in the neck, barely missing the main artery- I will be glad when the privates prisoners are removed, as their numbers alarm the Federals and render acts of useless tyranny frequent these are liable to provoke an outbreak at any moment, if a leader should give the word enough would respond to make the movement serious.