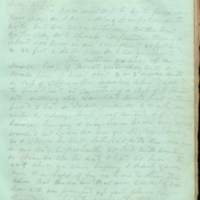 Fuller opens letter 6 with describing his living conditions upon returning to the fort, comparing them with the camp conditions. He gives details about their rations, and describes the unsanitary conditions for cooking because their water is contaminated with human waste.

I have ommitted to write for over two days- as I had nothing of importance to write, but we were returned to the Fort yesterday and closely confined- there is about 104 men in one room about, 65 feet long & 32 feet wide as near as I can guess.

The rations was half of a small loaf of Bread yesterday with a small piece of meat about 2 or 3 ounces, with a cup of Coffee. This morning when called to breakfast it consisted of a cup of coffee, and nothing else, some had saved part of their bread I had a small piece as I make a rule to always keep part until I get more however hungry I may be. We are very much crowded, but if we do not get Sickness among us I shall be well Satisfied with the change as our food is probably cooked with water as clean as can be had. I had no heart to eat, where we were before, I daily gave more than half of my rations to others, the idea that the water that our cooking was done with, was pumped up just where four thousand men had to evacuate themselves, was too revolting for a man endure until starvation drove him to disregard it-

I presume the immediate