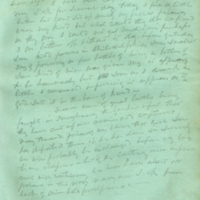 Fuller opens letter 7 by telling his wife that he's been extremely sick and can't obtain medicine. He finds some relief in provisions from kind persons in Pennsylvania, preserves and wine. More prisoners are brought from battles at Pennsylvania. Fuller doesn't sign this letter.

I have been confined to my bed very sick for several days, today I feel a little better but cant sit up much, my fellow prisoners were very kind but what could they do, confined as they are, I could not get medicine perhaps I am better off without it, day before yesterday some kind persons in Philadelphia, sent small jar of preserves, a few bottles of wine, a bottle of some kind of wine was given me, it appears to be homemade, but soon as I drank a little I commenced improving it appears as if God sent it in the hour of kneed-

Prisoners come of great battles being fought in Pennsylvania, the Yankees report that they have cut off our armies and captured many thousand prisoners, we believe that Genl Lee has defeated them if he has done so severely we will probably be exchanged before very long time elapses- but if the contrary our imprisonment will continue, we now have about 115 prisoners in this room, many are sick from lack of air bad provisions &c-