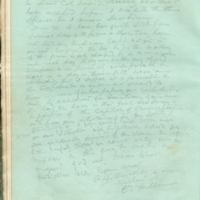 Fuller concludes letter 6 by assuming the reason for confinement of the officers is due to the escape of another prisoner, Lieutenant Colonel Brewery. He states that he is sick with fever and dysentery, and mentions the continued challenges to receive news. Multiple restrictions to the prisoners' freedom are added daily. There is news of General Lee's army possessing Pennsylvania.

cause of our reconfinement in close quarters is the discovery of the escape of an Lieut Col named Brewery who must have escaped before I was with the other officers as I never saw him.

June 30
I have been quite sick for several days with fever & dysentery, have not had any medicine, could not get it am yet confined to my bed. The monotony of the prison is only changed by a more rigorous rule each day, doors even inside ones closed windows will probably will probably be closed in a day or two. All news are excluded, but I suppose it is favorable to the Confederates as we are not allowed to hear it, even Yankee papers are excluded, but by accident we sometimes gain news, the last we have is that Genl Lee’s Army is in possession of the Capitol of Pennsylvania and fears are [intertained?] for the safety of Philadelphia, I hope success will [crown over arms?] or our situation will be pitiable indeed, we are gradually deprived of the chance to obtain little comforts, today we cannot write even a message to the Genl to make a request. God only knows what restrictions will come next