The Potsdam Conference - When the Cold War began 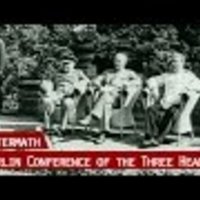 The Potsdam Conference - When the Cold War began

July 1945 - two month after the end of the war in Europe and the allied victory over the German Reich the three allied leaders have come to Germany to work out a piece treaty - these 16 days, where the fate of post-war Europe was decided, go down in history as the Potsdam Conference (Jul 17, 1945 - Aug 2, 1945)

The outcome was intended as a peace treaty for Europe, but it turned out to be the beginning of 45 years of cold war.

It was at Cecilienhof in Potsdam, where the big three met: Harry S. Truman, President of the Unites States of America, the British Prime Minister Winston Churchill and Josef Stalin, the Russian Communist Party General Secretary

The main topics to negotiate were how to divide the control over Germany (division into occupation zones), to agree on German reparations, to agree on the German borders, but also on borders of Poland, the dimantling of German war industry and the punishment of war criminals (trials, held some month later in Nuremberg).

Truman's intent was also to end the war in Japan as soon as possible. He mentioned a "powerful new weapon". In the last days of the conference, the US, Britain and China gave Japan an ultimatum to surrender or otherwise threatened with "prompt and utter destruction" without mentioning a new bomb.
Some days after the Potsdam Conference, Trum gave the order to drop off the first atomic bomb on Japan (Aug 6, 1945)

The documentation also shows pictures from the Berlin directly after the war, the destroyed city, the Führerbunker (Hitler's bunker), women clearing away the rubble, etc.

Cecilienhof in Potsdam is nowaday a memorial commemorating the Conference and negotiations for peace.