Two weeks after Fort French, representatives of the campus’s “Third World” groups (a phrase used for various minority organizations) met and issued a set of eleven additional demands to President Terrell. Via a multiple-page letter, the demands were rejected a few days later, and the student groups called for a campus-wide student strike on May 24th. While issues related to the Vietnam War prompted the occupation of French Ad, race was the focal point of the Student Strike.

Prior to the WSU Student Strike, Third World campus groups often in partnership with Black Student Unions successfully advocated for the formation of ethnic studies programs at other American universities. The first such strike held at San Francisco State University (SFSU) in 1968 was led by the Third World Liberation Front and SFSU's Black Student Union. That strike lasted for 5 months and resulted in committments by SFSU that helped promote greater diversity in its curriculum and faculty.

Rally in support of Ralph Atkins 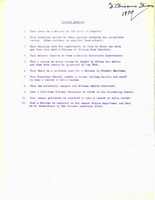 Chicano Demands from May 1970 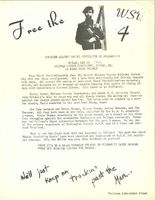 A number of racially charged events from January 1969 to May 1970 provided the fuel that made WSU ripe for the strike that swept campus. In January 1969 5 African American students were arrested as a result of a brawl at the Alpha Gamma Rho house stemming from an altercation in a campus basketball game between Alpha Gamma Rho and students living at Goldsworthy Hall. As the arrested students travelled to the Whitman County Jail in Colfax to begin their sentence on Friday, February 28, a crowd of protestors from local universities blocked traffic to the jail. After tensions between protestors and onlookers resulted in violence, the protestors sought refuge at the Methodist church in Colfax. The protestors from WSU, Eastern Washington University, and Whitworth University were arrested and the 5 students involved in the brawl were taken to the Whitman County Jail.

In March 1970, students demonstrated in downtown Pullman to protest a host of issues including the draft and support the National Farm Labor Union strike in the vineyards of central California. Amongst dozens of protestors that marched and stormed the Pullman Safeway in recognition of the grape boycott called for by labor leader Caesar Chavez, only Ralph Atkins, an African American man accused of inciting the riot, was arrested. Weeks later, Atkins was also accused of setting fire to Martin Stadium, although nothing came of the arson accusations. In April 1970, four African Americans, later known as the WSU 4, were charged with rape. Those who felt the men were unfairly charged protested on their behalf. Two of four men were ultimately convicted.

Amidst this sequence of events in Pullman and broader national debates about race, the Student Strike began after President Terrell rejected 11 demands made by a strike committee led by Third World groups on campus (see Terrell's response above). From May 24-June 1, striking students at WSU skipped classes, blocked roads, and picketed buildings. After a week of portest, the Third World groups and President Terrell reached an agreement on June 1st. With only finals week remaining in the term, the taking of finals was declared optional, and by the time graduation took place on June 7th, President Terrell was cheered during the commencement ceremonies. 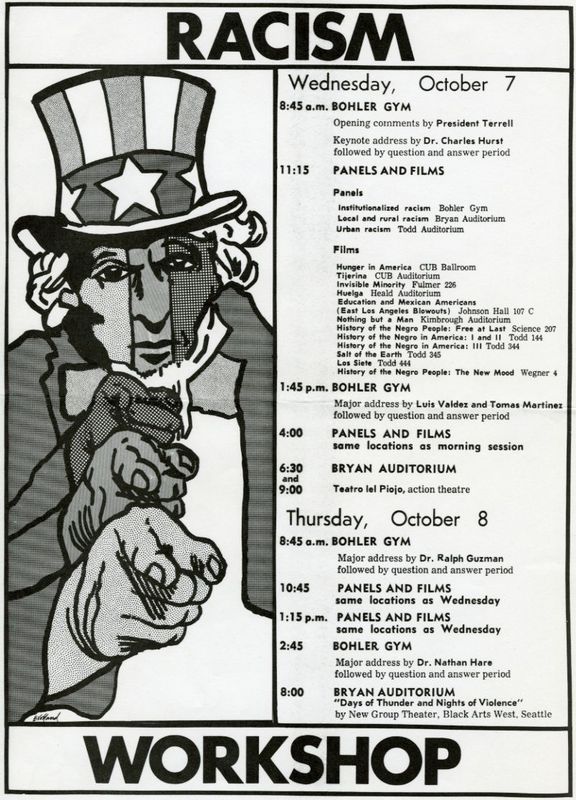 In Fall of 1970 and again in Spring of 1971, the university halted classes for two days, instead hosting Racism Workshops in Bohler Gym. A committee representing students and faculty of all ethnicities put together programs of speakers exploring racism. The fall workshops were very well attended and well reviewed; the spring workshops drew only a very minimal attendance. In the succeeding months, the follow-through on the eleven demands resulted in new classes and programs in minority studies, a focus on hiring minority faculty and staff and recruiting minority students, and a generally increased awareness of minority issues.

← Taking of Fort French
Much Remains to Be Done →
Strike!