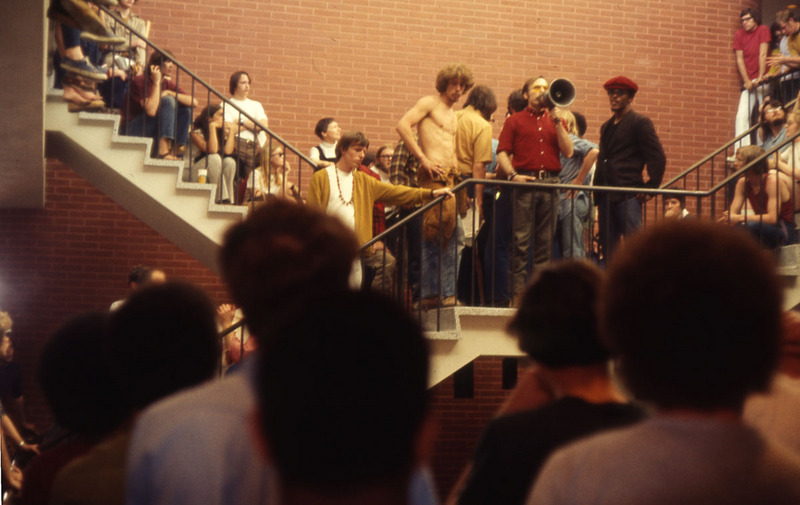 At approximately 12:30 p.m. on Tuesday, May 5th, 1970, several hundred students (reports vary, but most estimates are between 500 and 1000) marched into the French Administration Building and sat down, presenting the administration with a pair of demands for President Terrell, and refusing to leave until he met them:
1. “Send a telegram to President Nixon protesting the illegal and immoral aggression of the United States Army into the neutral country of Cambodia; and, protest the use of National Guard troops on university campuses.”
2. “That the University support the National Student Association's sanctioned nation-wide one-day Friday strike in protest of the invasion of Cambodia.”

The occupation was one of many student demonstrations across the nation on May 5, 1970. The occupation at WSU became popularly known as “Fort French.” President Terrell, as it turned out, was out of town that day, but he returned that evening at 5:30 to meet with the students. President Terrell and the protestors negotiated, off and on, for several hours. In the end President Terrell and the students agreed to a modified version of the original demands:
Thursday classes were canceled so students, faculty and staff members could attend a teach-in on U.S. military involvement in Cambodia.

Terrell sent a telegram to Nixon that read, in full: "The recent events on the campus of Kent State University and the extension of the war in Cambodia have created outrage and dismay on the part of a substantial segment of the campus at Washington State University. You have observed similar reaction across the nation. Many on our campus deplore the decision to send troops into Cambodia and the tragic deaths of the four students at Kent State."

Reports say that the students cleaned up their litter and vacated the building at about 9:30 p.m.