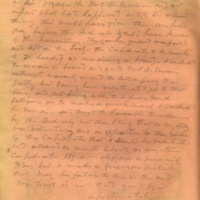 Fuller concludes letter 2, relating the rest of the incident aboard the Steamer Maple Leaf. The other part of the agreement with Captain Youngblood was that he was to continue on to Fort Delaware, and was not to inform the Federal forces of the incident until then. This was agreed upon, and 70 of the Confederate prisoners landed, leaving 27 on board. Fuller was urged to go with the party but didn't feel up to the journey and remained on board, noting that it might have been a fatal mistake.

[Transcript]
plan of the Yankee Captain, upon the Condition that he should swear to proceed directly on his voyage to Fort Delaware and not report what had happened until his arrival there, this would have given them one full day before the Federals would have known of the transaction. The Yankee guard was paroled and left on the boat, the Confederates to the number of 70 landed, 27 remaining on board. I concluded to remain on board and go to Fort Delaware although warmly urged to accompany the party; but having been well treated up to that time, and not being able to endure much fatigue or to make a quick march I concluded to remain and trust to honorable treatment by the Federals, not doubting that as my stay was voluntary and in opposition to the wishes of the Confederates that I should be well treated and allowed as much liberty as any other Confederate Officer who was a prisoner of War, but I made a grievous mistake that may be fatal to me in the end my trust is in God good bye.