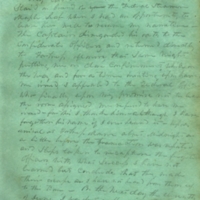 Fuller begins letter 3 with the results of the incident on board the Maple Leaf between the Confederate prisoners and Captain Youngblood; the Yankee Captain didn't act as agreed, but instead returned to Fortress Monroe. The incident was reported upon their arrival, around midnight. The next day, June 11th, Fuller was sent ashore at Fort Monroe to report to Colonel Ludlow, the officer involved in arranging exchange of prisoners.

My last letter informed you that I had staid on board of the Federal Steamer Maple Leaf when I had an opportunity to leave her. Well to resume my narrative. The Captain disregarded his oath to the Confederate Officers and returned directly to Fortress Monroe, that same night putting me in close confinement, while on the way and for a time insisting upon having me ironed, I appealed to the Federal Officer who finally upon my promise not to leave the room assigned me refused to have me ironed- for this I thank him- although I have forgotten his name if I ever heard it. Upon arrival at Fortress Monroe about Midnight or a little before, the transaction was reported and steps taken to recapture the fugitive Officers with what success I have not learned but conclude that they made their escape as I have not heard from them up to this time. On the next day the eleventh of June, I was sent on shore into Fortress Monroe to report to Col Ludlow, who is the Officer that arranges exchanges of prisoners,