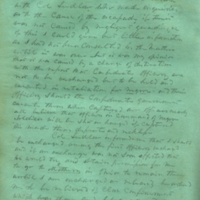 Fuller continues letter 3 stating that Colonel Ludlow was making inquiries into the cause of the incident, conducting interviews, including one with Fuller. The colonel informed him that he should be one of the first prisoners to be exchanged and if that did not happen soon, then he would try to send Fuller to his (Fuller's) mother's home in Ohio until the exchange or release. The boat once again departed.

[Transcript]
two other officers besides & several of the boats crew were also sent for I was the last one that had an audience with Col Ludlow, who made inquiries as to the cause of the escapade, if it was not caused by negligent guarding &c, of this I could give but little information as I had not been consulted in the matter until it was over, but it was my opinion that it was caused by a change of destination with the report that Confederate Officers are not to be exchanged but to be held and executed in retaliation for Negroes and their Officers, should the Confederate Government execute them when captured our officers nearly all believe that officers in command of Negro Soldiers will be shot or hanged if captured this made them desperate and reckless.

Col Ludlow informed me that I should be exchanged among the first officers exchanged and if an exchange was not soon effected that he would try and obtain permission for me to go to Mothers in Ohio to remain there until I am exchanged or released, he ordered me to be relieved of close confinement which was done and I was allowed the same Liberty that other prisoners were allowed while on the boat, - At 2 o’clock on the 12 inst we started again