In 1931, a report by the Army Corps of Engineers supported the construction of a dam stating that surplus electricity could be sold to mitigate construction costs. By 1933, the Grand Coulee Dam emerged as a more promising project and backers of the Gravity Plan conceded defeat…sort of. The below cartoon from the Spokesman Review provides an overview of events leading up to the Grand Coulee’s construction. This story presents Gravity Plan proponents as trailblazers forging a path that eventually leads to the dam, while omitting the role of dam supporters such as James O’Sullivan, Rufus Woods, and Senator Clarence Dill. 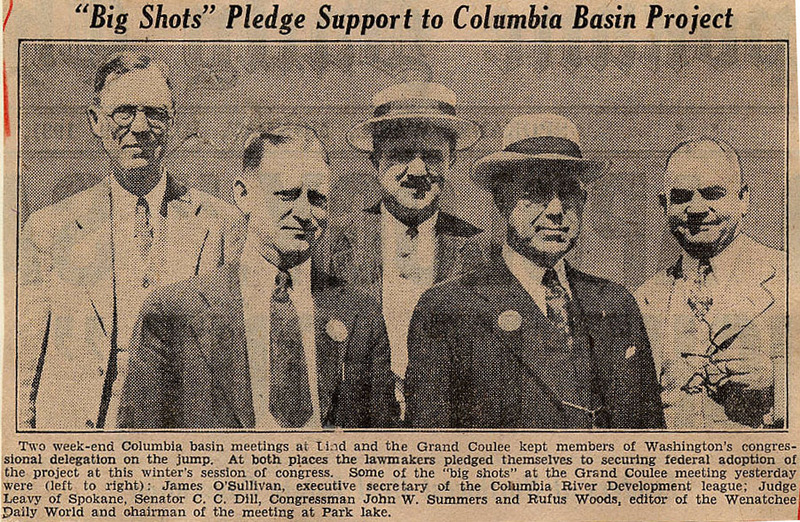 The primary supporters of the Grand Coulee Dam were mainly civic leaders from towns in central Washington, notably, Ephrata and Wenatchee. Initially presented in an editorial in the Wenatchee Daily World in 1918, boosters for the dam envisioned an agricultural and industrial boom resulting from the irrigation and power created by the dam. If successful, they imagined a new self-sufficient region that would stand apart from the Spokane-dominated Inland Empire. Unhappy with the lack of support given by the Columbia Basin Irrigation League, dam supporters like Rufus Woods and James O'Sullivan formed the Columbia River Development League.