The Manhattan Project, the United States’ project to develop an atomic weapon during the Second World War, was a joint effort between the civilian scientists from academia and the military officials overseeing and moving the project along. Thousands of personnel were required in the theorizing, construction, and assembly of both the bombs themselves and the test sites they would face trials on. However, secrecy and confidentiality were crucial to the success of the project; this can be observed in President Roosevelt’s letter to Oppenheimer in June of 1943, which noticeably leaves out details about the Manhattan project.[1] Only a select few were privy to the true nature of the project for security reasons, these individuals being the top scientists, engineers, or military officers.  Key scientists in developing the process to weaponize atomic energy were those such as Robert Oppenheimer, David Bohm, and Enrico Fermi, while the project was overseen by General Leslie Groves. 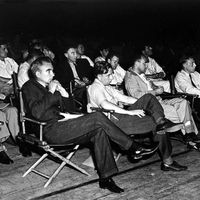 Photograph of the 1946 colloquium at Los Alamos. 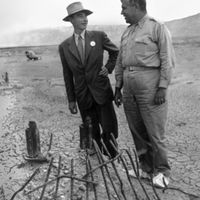 Robert Oppenheimer and Leslie Groves examine the remains of one the bases of the steel test tower.