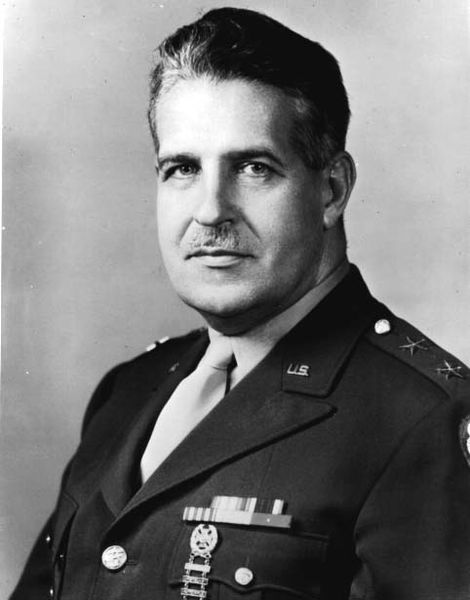 Major General Groves in full dress uniform after being promoted in March of 1944.

Leslie Groves was the Army general in charge of overseeing the Manhattan project, as it was a military endeavor. An officer in the Army construction division before America’s entry into the Second World War, Groves distinguished himself by reforming and renovating the training facilities the Army would badly need for mobilization of troops. In light of his success, a Congressional committee appointed Groves as the head of the Manhattan project, which would need organized logistics and the construction of numerous facilities to be effective. Groves did not hide his disappointment at being given a non-combat commission for the duration of the war[6], but still effectively carried out his new duties. Groves was responsible for approving the location of the Los Alamos laboratory location, as well as selecting Oppenheimer as the facility director there. Groves was also successful in acquiring the deposits of uranium ore badly needed in planning and construction of the bombs.

Following the war, Groves faced disdain from the military high command over aspects of his handling of the Manhattan project, largely in regard to selecting Oppenheimer as a project lead in spite of his Communist party connections. Oppenheimer was never recruited by the KGB and did not compromise nuclear secrets, but in the era of post-war Red Scare paranoia this mattered little. Groves was told he would not go much farther up the Army chain of command in light of this. This revelation, along with the post-war downsizing of the US Army, convinced Groves to resign from the Army at the rank of Lieutenant General in 1948.[7]