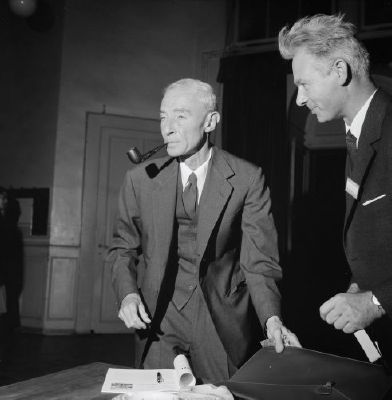 Robert Oppenheimer attending a meeting after the successful deployment of the atomic bombs.

Robert Oppenheimer was one of the leading physicists on the Manhattan Project, placed as head of the Los Alamos Laboratory in New Mexico, the central research center for completion of the project. Oppenheimer was selected by General Groves and was valued especially for his expertise in not only physics, but also chemistry, metallurgy, and engineering. The other physicists found by Groves were not as knowledgeable as Oppenheimer in these fields, and did also not understand the challenges or requirements of the construction of the Los Alamos Laboratory. [2] Oppenheimer himself was the one who settled upon Los Alamos for the location of the remote laboratory, and construction began in December of 1942. Throughout the course of the project, Oppenheimer was revered by his fellow scientists for his wide knowledge in all fields on the project, and his administrative skill in managing a project of such size as the Manhattan project. Additionally, Oppenheimer played an insurmountable role in smoothing out the ethical and cultural conflicts between the scientific and military staff. [3]

When the Trinity test of the atomic bomb succeeded in New Mexico in 1945, Oppenheimer expressed initial excitement that the project had succeeded. However, the use of the second atomic bomb on Nagasaki upset himself and many of the scientists on his team, which they deemed unnecessary from a military standpoint. These would not be the last of Oppenheimer’s misgivings over the bombs. Oppenheimer visited President Truman in October of 1945 following the end of war, trying to convince him to ban the use of nuclear weapons. The meeting ended disastrously for Oppenheimer however, and he would butt heads with the American government more and more in later life. Under FBI investigation for communist ties, Oppenheimer fell victim to the Red Scare in the United States and faced a congressional hearing in 1949, and had his security clearance removed in 1953. [4] After his public humiliation, Oppenheimer retired to a private life and died in 1967.

[4] Transcript of Hearing Before Personnel Security Board (1954) (testimony of J. Robert Oppenheimer)