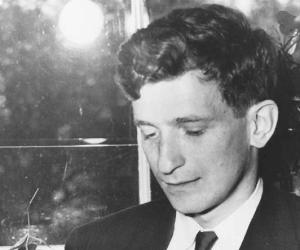 A young David Bohm photographed before his participation in the Manhattan project during the late 1930's.

David Bohm is commonly referred to as one of the most influential and significant theoretical physicists of the twentieth century. Being one of Oppenheimer’s most esteemed colleagues, he was asked to join Oppenheimer at the top secret Los Alamos research facility. However, Leslie Groves denied him this opportunity after discovering some unfavorable political ties during his youth.[8] His work on the process of collisions between protons and deuterons proved valuable to the Manhattan project and was promptly seized and classified by the United States government. A few years later Bohm would go on to preform critical calculations on the calutrons at the Y-12 test facility located at Oak Ridge. These calculations would be used electromagnetically enrich the uranium used in the bomb dropped on Hiroshima in 1945.[9]

After the war in 1950 Bohm was arrested under allegations of having ties with the communist party due to his affiliation during his teenage years. He was almost immediately suspended by Princeton University, where he worked alongside Albert Einstein. After being acquitted in 1951 and fearing for his freedom, he moved to Brazil and became a physics professor at the University of Sao Paulo, one of Brazil’s top universities.[10]