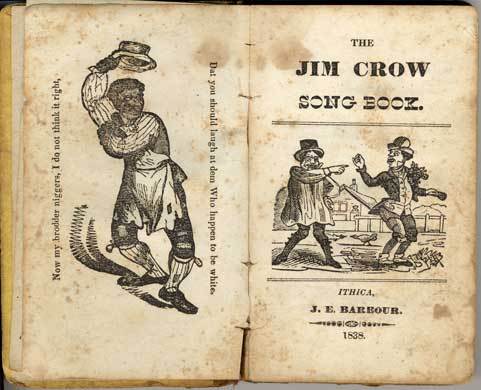 The Songbook showcases the early depiction of a minstrel show character, Jim Crow. It wasn't until the late 1800s that the expression "Jim Crow" was used to describe the laws and customs aimed at segregating society, restricting social contact and limiting freedom and opportunities.

“Jim Crow,” a term coined from the song “Jump Jim Crow,” was made famous by white entertainer Thomas Dartmouth Rice, who sang the song while impersonating a black slave. The character was named Jim Crow.  The name Jim Crow became a popular stage name among other white comedians imitating slaves.The term quickly gained popularity in Southern culture and became a slang term to identify a black person. The term “Jim Crow” was later used to identify the rules and guidelines for black people to abide by in society. 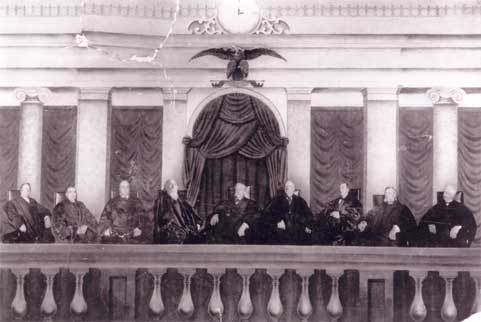 The members of the United States Supreme Court in 1896-1897. Under Chief Justice Melville Fuller, the Court established the separate but equal rule following the pivotal Plessy v Ferguson Case.

Jim Crow Laws were promoted by White Supremacists, and supported by Southern Democrats. They were also legitimized when the Supreme Court made “Separate but Equal” legal following the Plessy v Ferguson Case in 1896. Other organizations who promoted White Supremacy, such as the Klu Klux Klan, wanted to restrict the liberties of blacks, aided in the spread of Jim Crow Era Segregation, and took it upon themselves to enforce the Laws. The Jim Crow Laws directly affected the black communities in both the North and the South.  All blacks were forced to conform to the new regulations put forth by the Jim Crow Laws. When it came to affecting who could vote, the rules also impacted poor white southerners. However, exceptions were made that allowed these whites to participate in elections.

← Intro
What →
Jim Crow
Who