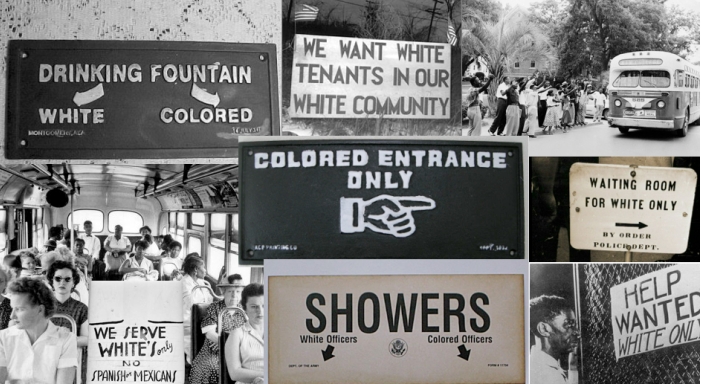 These posters are signs that represented the various forms of racial inequality and segregation that African Americans faced.

After the symbolic Emancipation Proclamation of 1863, the nation eradicated the system of slavery within the United States. After the eradication, various forms of Civil Rights and Civil Movements formed for the validation of citizenship of African Americans. As the movements grew, so did the armed White Southern attacks against African Americans. The Jim Crow era was used to enforce discrimination of African Americans after the Civil War and the Emancipation Proclamation. Southern whites refused to take part in Reconstruction with the fear of Black domination over politics, the economy, and everyday lifestyles. The Jim Crow laws "represented the legitimization of anti-black racism" (Museum of Ferris State University).

Many social and cultural institutions supported the oppression of African Americans. Some of the supportive Jim Crow "etiquette" opposed African Americans shaking hands with whites, it was illegal to show public affection to each other, and white's were not supposed to call African Americans by "Sir, Mr., Mrs., or Miss". Jim Crow laws excluded Blacks from "public transport and facilities, juries, jobs, and neighborhoods"; the laws were also known as Black Codes (Museum of Ferris State University). Jim Crow laws and segregation was prevalent from the Reconstruction era all the way to the Civil Rights Movement. To this day segregation and discriminatio may sometimes be apparent in our everyday lives' without even realizing it.