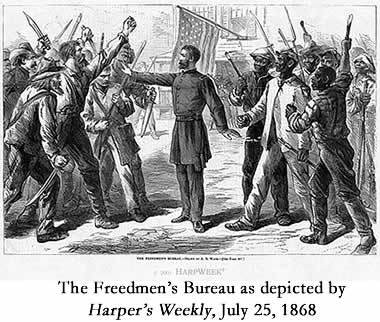 The Emancipation Proclamation was on paper intended to free all slaves. However, this legislation in practice was ineffective if not physically enforced by force of arms. Historians estimate around 474,000 former slaves were funded by the government as free laborers, soldiers, farm hands, and camp residents during the war. As reconstruction began in the southern states it was clear to northern authorities that slavery would not simply go away due to the 13th amendment. “Slavery would not simply die; it would have to be killed.”[1] Slavery as an institution was deeply rooted in the way of life of the South; heavy government involvement was implemented to maintain the power of slave holders. Throughout the war many Americans took notice of the need for government involvement to maintain the institution of slavery and in reconstruction saw that emancipation would also require ongoing government action. 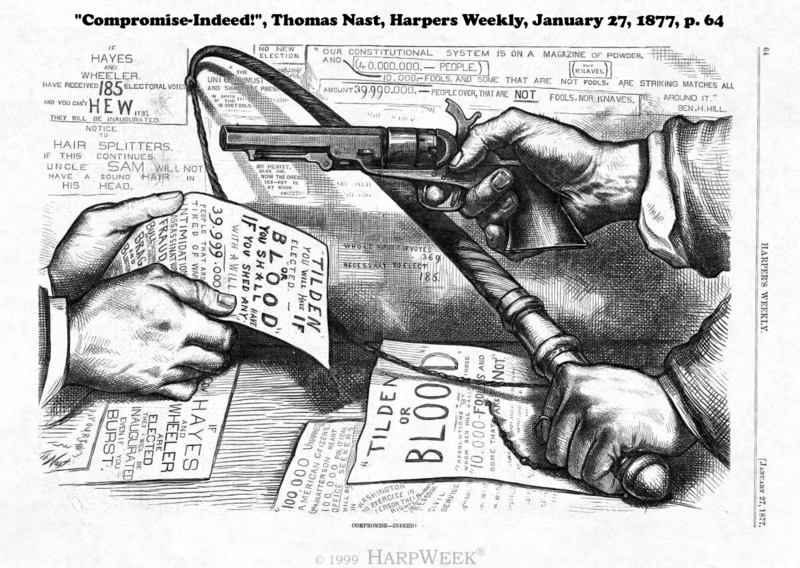 In 1866, Congress passed the Civil Rights Act and the four Reconstruction Acts, effectively dissolving all of the governments in the former Confederate states except for Tennessee. It divided the South into five military districts. These five military districts in conjunction with the Freedman’s bureau sought to protect the rights and lives of the newly freed blacks. These acts forced former Confederate states governments to ratify their constitutions giving rights to blacks or forfeit their representation in Congress. After 1868, violence accompanied many of the southern elections, especially in the Carolina’s, Louisiana and Mississippi. Various groups sprung up to try and intimidate Republican candidates out of office and blacks from voting at all. Northern troops protected polls for African American voters until the election of 1877. Under the compromise of 1877 the Democratic Party yielded the Presidency with promise of no further intervening of southern affairs by Republicans. Union troop removal broke the remaining safeguard freed blacks had, Democrats proceeded to restrict the rights of African Americans by implementing subjective literacy tests, poll taxes, and residency requirements. The “Jim Crow” era of the South would begin with the protection of Union troops being repealed.