KKK Through the Years

Knights of the Ku Klux Klan. Yesterday, Today, and Forever. A  KKK pamphlet produced in 1915 describing the goals of the reformed Klan and requirements to join. 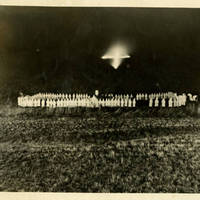 Klan meeting in Colfax, WA around the 1920s. 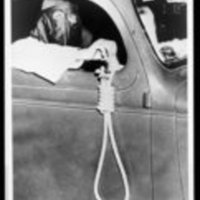 Klan member threatens Black neighborhood the night before an election, 1939 in Miami, Florida.

After being disbanded in 1871, the KKK would not reform until the next century. After a meeting between the Grand Wizard and his followers, the KKK was recreated at the turn of the century. Originally, the Klan was designed to help maintain American and Christian values such as obeying the government and protecting women and children. African Americans for the most part, were to be left alone as long as they did not fight for southern equality. Later in 1915 membership in the KKK grew exceptionally in popularity in response to the popular movie “Birth of a Nation” which portrayed the Klan as a righteous law enforcement who would save white Protestant American from other “threats”. In the 1920s, the Klan would spread to all corners of the US including Colfax WA. Klan growth would slow during WWII but would come back with a vengeance during the 1950s and 1960s. When black soldiers returned home from the war, they demanded equal rights, sparking the Civil Rights movement. The Klan sprang into action by beating, shooting, and killing Civil Rights activists and using terror tactics to prevent African Americans from gaining equal rights. After the Civil Rights Act was passed, Klan membership declined and began to reform into the KKK we are familiar with today.