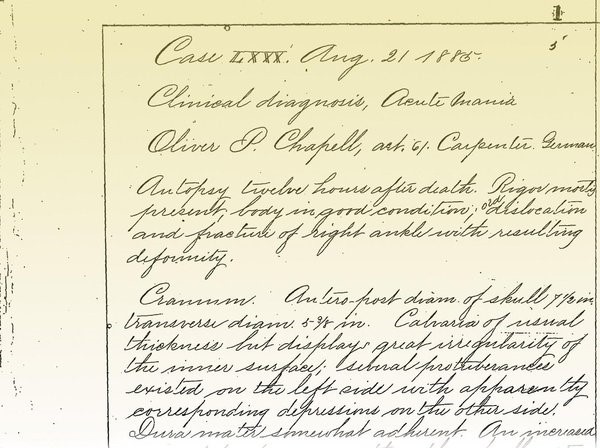 Image of an autopsy report of Oliver Perry Chappell, which describes significant brain irregularity as a result of combat.[1]

It’s important to realize that soldiers during the Civil War experienced war in a similar, if not worse fashion, than soldiers do today. Civil War killing was a lot more personal due to the fact that there was more hand-to-hand killing. More importantly, war veterans today suffer greatly from post-traumatic stress disorder (PTSD), and have treatment strategies and professionals to help them overcome their problem: in the mid-nineteenth century, as we touched on earlier, doctors barely knew about sanitizing their tools before operating on a wounded soldier. Therefore, PTSD during the Civil War was arguably more deadly than it is today due to the lack of medical knowledge.

PTSD went by many names during the war such as “shell shock,” “gas hysteria,” “combat fatigue,” and “old sergeant’s syndrome.” More importantly, it was not recognized as a disease like it is today. Although difficult to read, this autopsy report below found “great irregularity” in a soldier’s brain along with “acute mania,” proving that there was medical evidence that brain damage came out of combat.[1] Soldiers of the Civil War had to live with this mental illness well after the war, and most of the time, for the rest of their lives.