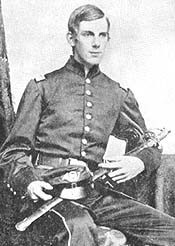 Oliver Wendell Holmes, as pictured in a compilation of his diaries and letters, by Mark De Wolfe Howe.[1]

The hospitals during the war were not adequate for proper treatments, and on top of that, the trauma that the soldiers endured while in combat was immense. Oliver Wendell Holmes, the lieutenant of the 20th Massachusetts Regiment of Volunteers who later went on to become a Supreme Court Justice, kept a diary of his personal experiences. This diary had first-hand accounts of his experiences with injury during battles on three separate occasions. One occasion was during the Battle of Ball’s Bluff: he described seeing a fellow soldier “shot through the head and covered with blood,” as he himself spat blood and realized that he had been shot through the lungs. Upon arrival to a hospital, Holmes saw men lying on the floor in pools of their own blood while a doctor attempted to pick out the bullets lodged inside his lungs.[1] This was a common scene for soldiers to see during the war, and stuck with them for the rest of their lives. 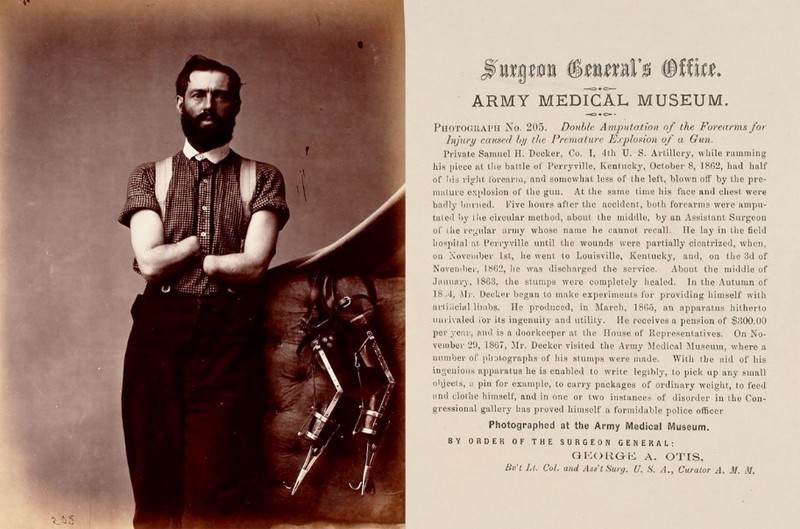 Samuel Decker and his medical report describing the timeline of the creation of his mechanical arms.[1]

One example of a soldier who was impacted physically and emotionally during the war was Samuel Decker. Decker lost both of his arms during the war, and had to develop tools that attached to what was left of his arms in order to attempt to live a normal life. The Army Medical Report to the right of the image of Decker himself states that after his arms were blown off on October 8th, 1862, it took until about mid-January for his “stumps” to be fully healed, and he did not complete his apparatus until November of 1867. He had to go five years without the use of his arms until he gained some of his abilities back; but, this was a small success because most soldiers never recovered like Decker did.