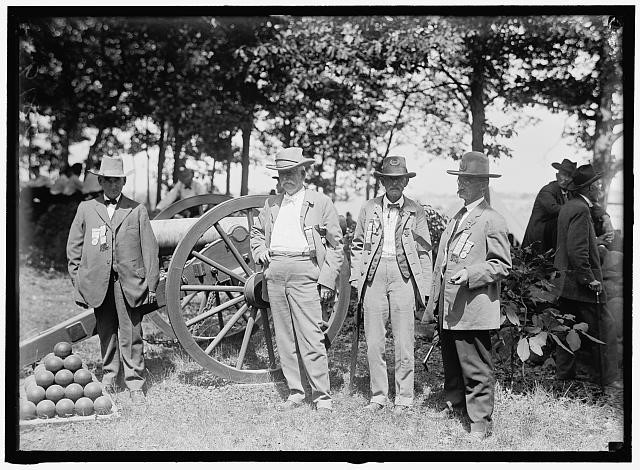 Reunion of both the GAR and UVC in 1913, years after reconstruction and their establishment.[1]

On top of potentially living with PTSD, soldiers had to go home and interact in everyday life. This was a tall task in itself. For Union soldiers, there was obviously happiness due to winning the war; a happiness that Confederate soldiers did not get to come home to. However, soldiers on both sides caused their share of destruction. One Union veteran claimed that he was unfit for the life of a civilian, and dreaded it.[1] Soldiers found outlets in alcohol and drug addiction, which often led to public brawls. The Confederate soldiers that decided to stay in the United States, as opposed to leaving for Latin America, were often the source of robberies and attacks on Unionists, which was fueled by the disgrace of losing the war. The two sides did, however, manage to generate a sort of veterans program: the Union had the Grand Army of the Republic (GAR), and the Confederates, the United Confederate Veterans (UCV). The GAR was compiled of people (mainly businessmen) who wanted to aid veterans of the war, and made sure that history textbooks portrayed the Civil war as an “act of national unity” against a rebellion.[2] The UCV was similar to the GAR, however the pensions they created were not as high paying as the Union. They had organized gatherings for all ex-soldiers of the Confederate, and in both parties, veterans would talk about old battle stories and reconvene with lost friends.