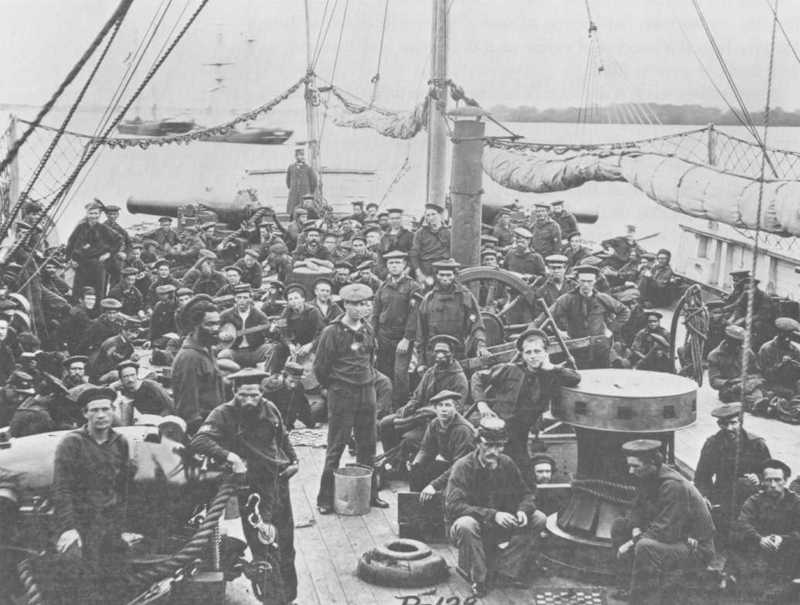 A still photograph of the crew aboard the USS Miami

As the Union blockade tightened, the naval theatre became even more important, with the Confederates purchasing and constructing as many ships as possible both at home and abroad in order to withstand the North’s increasingly effective naval campaigns. Lacking the capacity to build a large naval fleet at home, the Confederates looked to England in order to purchase combat ready warships. With the knowledge that the small Confederate navy could not withstand toe-to-toe combat with the Union flotilla, Confederate Secretary of the Navy Stephen Mallory devised a strategy to raid Union commercial vessels across the Atlantic, Pacific and Indian Oceans, far from the Union blockade.[1] Mallory hoped that such a plan would successfully target enough American shipping to draw U.S. Navy vessels away from the blockaded Confederate coast. The most significant ship used to this purpose, the CSS Alabama, was launched from Liverpool on July 29th of 1862. Within eight months, the Alabama had successfully disrupted an estimated $2,327,242 worth of Union shipping. The news spread through the Northern states like wildfire, frightening American merchantmen and prompting a manhunt for the ship by the Union Navy.[2] Although the Alabama was eventually sunk off the coast of France by the USS Kearsarge in 1864, her captain, Raphael Semmes would escape and continue to pester Union shipping for the remainder of the war.