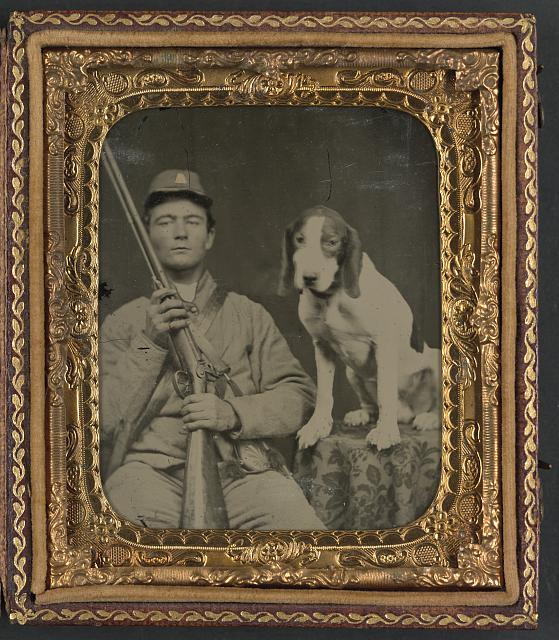 A Confederate soldier with a shotgun

The constant wear and tear of movement and battles played a heavy toll on both soldiers and their equipment as shown in this Confederate soldier’s letter home, “Our regiment used everything we had. I have no blanket nor any clothes but what I have got…Pa, I want you to have me a pair of boots made. Those shoes you had made for me ripped all to pieces. Our regiment used everything we had”.[1] Life for the common soldier was not the glamourous life envisioned by so many when the war originally broke out.

The equipment of the Southern soldier was an interesting assortment of issued gear, homemade items, and captured Union goods. Many times the issued gear given to the Southern soldier by the government was not the quality of the Union forces, thus Confederate soldiers often times only held on to their gear until it could be replaced by captured enemy gear. Berry Benson, an infantry man in the 1st Carolina Infantry said, “The whole Confederate army refitted itself with blankets, rubber clothes, tent flies, haversack and canteens, so that in the middle of the war and alter, to see equipment of southern make was somewhat of a curiosity”.[3] Although there were numerous times Confederate soldiers would replace their gear for superior Union gear, there were also many times where they would abandon all equipment so less weight had to be packed from battlefield to battlefield.[4] The dumping of general gear resulted in a more comfortable march, but had severe consequences for living standards later on once the force had reached the encampment.