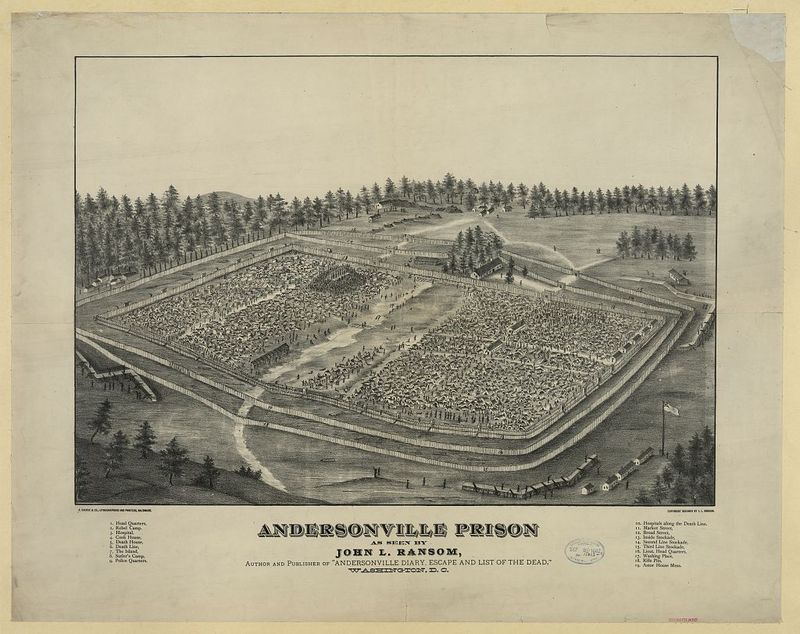 Andersonville Prison as seen by John L. Ransom, author and publisher of "Andersonville diary, escape and list of the dead"

Andersonville, Georgia was home to the notorious southern controlled prison also know as Fort Sumter. The prison opened its doors in the early years of 1864. Confederate strategist found Andersonville to be an idea place to keep large numbers of captured Union soldiers, due the prison being close to military strongholds in Richmond. Andersonville’s location was also abundant in food, and was deep in the south, far away from the raging battlefield.

Andersonville encompassed 2 acres with 14-15 foot pine walls that closed it off. A small fence was built 19 feet from the wall; know as the “deadline” (Futch, History of Andersonville). If prisoners crossed this fence they were shot by guards high above in towers. The conditions inside the prisoners were unimaginable. Mosquitos and pest caused large outbreaks of disease, along with poor sanitation. Of the 45,000 union POW’s that found themselves in Andersonville, over 13,000 of them perished inside.

The prison started to be evacuated in September of 1864, as Union cavalry overtook Atlanta and was in easy striking distance of confederate prison strongholds like Andersonville (Hall, National Geographic News). The prison was occupied by a few numbers of union POW”S until the end of the war in 1865.