Effects of Transcontinental Railroad on Western US 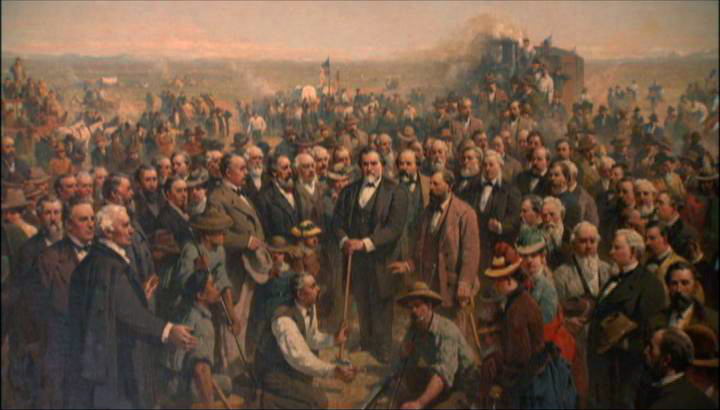 Driving in of the Golden Spike in Promontory Summit, Utah on May 10th, 1869 to mark the completion of the first American transcontinental railroad - joining the Central Pacific and Union Pacific railroads. 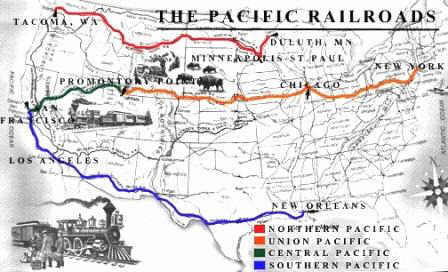 Map of the four major transcontinental railroads, each bringing vast amounts of demographic, economic, and environmental change to their respective regions.

With the aid of the federal government in both massive land grants and financial funding, railroad entrepreneurs and private investors transformed the western United States. From making locations like Las Vegas, Aspen, Sun Valley and other majorly populated and popular cities possible - in addition to national parks - railroads allowed both the population and preservation of all the west. Constructed in response to the gold rush of the 1850's and 60's, investors and businessmen realized the rush would eventually end and new markets must be explored. Advertising tourism and railway traffic forced railroad companies to align themselves with certain groups with certain values, such as environmentalists. Preserving the untouched and exotic natural beauty of the west, from the southern Grand Canyon to the northern mountains and evergreen forests, railroad companies promoted national parks and conservation. Such promotion also coincided with the new markets of exotic resorts and domestic tourism, a part of a new leisure travel business railroad companies advertised along side newly formed national parks. Subsidized railroad companies in the late 19th and early 20th centuries were the most important factor in the substantial increase in leisure travel related markets such as national parks, resorts, and the rise of major western cities with the increased accessibility to once isolated and untraversed regions. 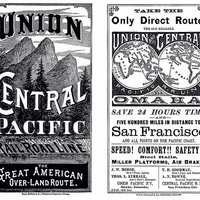 The first true transcontinental railroad, the Union and Central Pacific prided itself on not only it's scenic route as can be seen by the left pain of this flier, but for its San Francisco terminus. 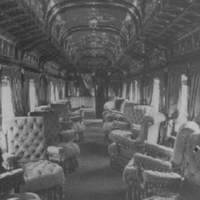 With the invention of the "Pullman Car" in 1864 (luxurious railway cars for the wealthy that enabled travelers to sleep in comfortable cabins) investments in railroads and their destinations skyrocketed. Pictured here is a social cabin that allowed wealthy tourists to socialize and take in the outside views in comfort. 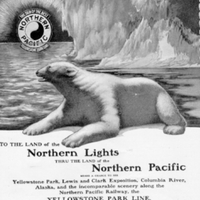 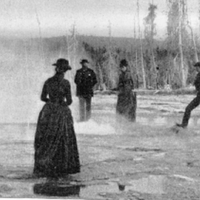 Opening in 1872 mainly due to the pressure of railroad companies, Yellowstone National Park became a major focal point for the Northern Pacific, who announced their "Yellowstone Park line" in 1880. Pictured above is a party of wealthy tourists judging on their fancier attire (especially the women) and the fact that they are few in number as it was expensive to travel in the luxurious Pullman cars of the Northern Pacific. 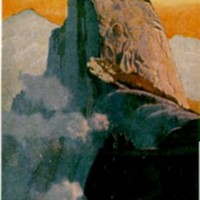 The focal point of the Southern Pacific, Yosemite Park opened in 1864 and advertised by the SP in 1907 via their "Yosemite Valley Rail Line." Natural beauty and vast landscapes became the focus of all railways with all locations seemingly in competition with eachother and their respective rail companies who "owned" them. 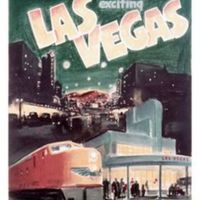 Although a later advertisement, cities like Las Vegas were a possibility because of the ease of access to them provided by the Central and Union Pacific rails. In addition, irrigation efforts from both the Central/Union and Southern Pacific supplemented the survival and growth of such cities. 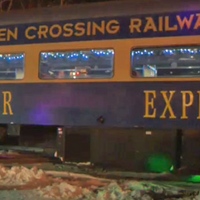 A product of railway progress much like Las Vegas, Aspen sprouted up in part because of its natural beauty and proximity to railway lines. Both were advertised by railway companies. 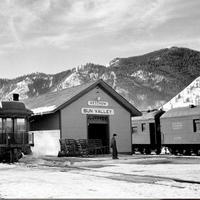 Although opened in 1936, Sun Valley was opened as a product of demand by wealthy leisure travelers for a premier ski resorts comparable to a Switzerland resort - and of course its proximity to railways made it all possible.