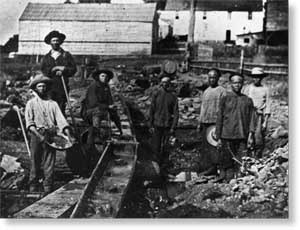 Chinese immigrants working together with other immigrant groups in performing a slucing operation. 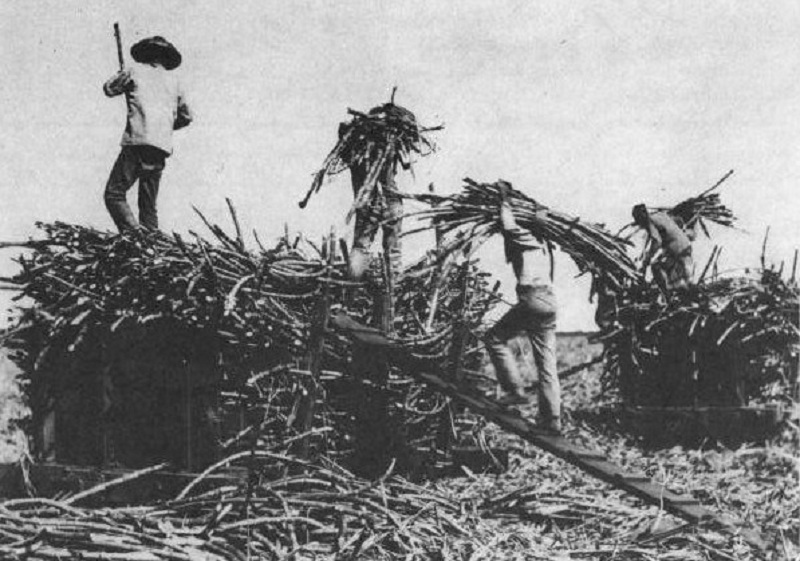 A group of Chinese immigrants working in one of the many sugar cane fields on Hawaii in the early 1900s.

Chinese immigration had started gaining numbers around mid-nineteenth century. The first influx occurred between 1840 and 1880 from Guangdong Province, which was approximately 370,000 Chinese workers. Many of the Chinese jobs at the time consisted of building railroads and mining gold. Many of the employers in California at the time saw Chinese workers as indispensable. Initially, the way they worked was different from the American way, they weren’t good innovators or leaders, but they were great followers and imitators. When someone asked the Chinese to work, they did it mostly without saying a word or complaining about it. A lot of the other immigration groups were able to work together with the Chinese and there wouldn’t be a big squabble over power because they were so accepting of orders. Another great trait of the Chinese is that they are fast learners. By being humble and quiet, they learn with their eyes and develop specific skills very quickly. Eventually however, they were able to move up on the pay scale to bigger and better jobs.

Despite the large amount of immigrants that arrived on the west coast, there were a lot of Chinese immigrants that reached the Hawaiian Islands as well. Many of the immigrants received the same treatment from dominant whites in the plantation fields that they worked in. In 1850, the kingdom of Hawaii passed a law titled The Act for the Government of Masters and Servants which allowed sugar plantation owners to hire foreign laborers for a maximum of five years. The two towns that had a large influx to Hawaii was Kwangtung and Fukien. The two towns were in an economic and political crisis and decided to leave the country to start a better life. When the Chinese arrived to Hawaii, they were selected, cleaned, and picked like a pig at an auction. After they were forcibly sent to a plantation that was picked out for them, they proceeded to live in wooden buildings with dirt floors. Needless to say, the early Chinese immigrants had a hard life on the plantations.

The reciprocity treaty that was passed in 1876 led to an increase in sugar production during that time. Over the span of eight years, sugar manufacturing in Hawaii quadrupled to 142 million pounds a year in 1884. Along with the steep rise in production came the increase in wages that the Chinese were able to earn. Their monthly salary rose to 12-14 dollars a month. With the Chinese Exclusionary act, many of the Chinese immigrants that settled in California were sent to Hawaii to work in the plantations. During that time, the Chinese population multiplied by a large margin, increasing from 364 immigrants to 18,254 immigrants in 1884. At the time, that was nearly a quarter of the entire population of the Hawaiian Kingdom. With this drastic increase in Chinese population, the government decided that they needed to control the amount of Chinese that disembarked on the islands.