In the early 20th century, the sport of football was an extremely violent and dangerous sport far from its present day form that saw dozens of athletes dying on the gridiron year after year. Little to no protective equipment was used and the style of the game, akin to rugby, compressed the action into small areas in contrast to the present day spread out nature of football. Theodore Roosevelt’s advocacy of the American “strenuous life” and involvement with the presidents of Harvard, Yale and Princeton aided the 1905 football reform movement and saved the game of football from extinction.

The Structure of Football before 1905

Due to football’s rugby origins, advancement of the ball downfield towards the goal line consisted of passing the ball backwards to teammates. The downs consisted of normally eleven men on each side of the ball, who would play both offense and defense all game. Players would line up shoulder to shoulder and when the ball was snapped, the ball carrier would run either straight up the middle, to the left of his blockers or to the right. Often, players would not wait until the snap of ball to shove or punch their opponent. One of the first “plays” to be introduced into the game was brought into the game by a Harvard team advisor called the “flying wedge.” The play called on Napoleonic military tactics and would utilize a majority of the teams’ blockers to break through the defensive lines’ weakest point. All of the lineman would line up fifteen yards in the backfield and start running towards the line before the ball was snapped. The momentum gained would often result in large chunks of yardage gained and yet drew mass criticism from those concerned with player safety. 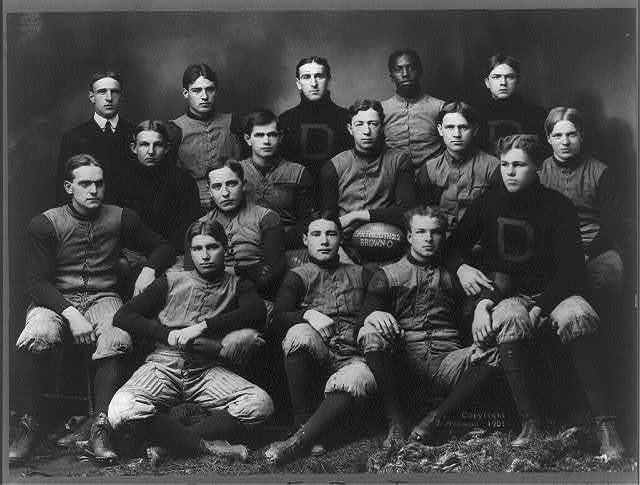 The Structure of Football before 1905 (con't)

Protective gear and uniforms worn by the players in these late 19th century contests were also a stark contrast to the modern day game. When the players of Harvard University’s football team appeared from their locker room to take on Yale on November 24th, 1894, they did not wear helmets or ”head harnesses”. They mainly relied upon “their own long hair to protect their skulls." The only specialized equipment developed for football players at the time were pads to protect “vulnerable parts of the body.” These pads were designed into belts and other arrangements by sporting good companies so a player could easily wear them. Of the series of specialized equipment, nose masks that resembled shoehorns were developed to protect one’s nose and teeth. Cleats of the day posed more of a risk of puncturing another player rather than traction gain as they were constructed from screw plates and leather spikes affixed to kangaroo hide.

Roosevelt’s life shaped his future activities and beliefs that valued fitness and athletics in one’s life. The advocacy for American activity and exercise culminated in his Vice Presidential candidacy and campaign for the betterment of the nation. In a speech given in Chicago, Illinois in April 10th, 1899, Roosevelt argued that an individual that puts forth a “strenuous effort” and is not lazy, will be a success. Roosevelt invited the coaches of the Ivy League’s top schools Harvard, Princeton and Yale to a meeting at the White House on October 9th, 1905. Roosevelt began the meeting by addressing incidents in the game that he felt did not adhere to “both the letter and spirit of the rules.” The second meeting with football personnel that appeared on Theodore Roosevelt’s schedule that day was a lunch with Walter Camp. Camp and Roosevelt’s meeting lasted just over two hours and concluded with the two drafting a joint statement outlining their intentions. The statement put simply that there was an agreed obligation “to carry out in letter and in spirit the rules of the game of football relating to roughness, holding and foul play.”

In the early winter of 1905, the push to abolish football was at its peak along with several other interests wanting to change the game themselves. Members of the university community such as Harvard president Charles W. Eliot started the push for the abolition of football well before the 1905 crisis and it was up to Camp and Roosevelt to stave off the momentum being gained by Eliot and supporters. One of the men wanting to establish his own committee was Henry MacCracken, chancellor at NYU. As Camp planned on carrying out the President’s orders to codify new rules for the safety of the game, MacCracken played foil in the process. Camp had scheduled a meeting to accomplish draft a new set of rules with Harvard, Yale and Princeton on December 28th. MacCracken subsequently called a meeting on the same day with representatives of 62 institutions. On January 12th, 1906, the merger between the Camp and MacCracken committees took place. The newly created organization called itself the Intercollegiate Athletic Association of the United States (IAAUS) and would later be “rechristened” as the National Collegiate Athletic Association (NCAA) in a few short years.

Sweeping revisions to the game included rules aimed at initial targets of relieving injuries and foul play. The “neutral zone” was instituted, a one yard buffer, between the offensive and defensive lines to provide the referee a better view of the battle between the teams. Building on Camp’s initiative of limiting the number of players on each side to 11, further reform limited the players lined up the backfield to five so as to limit “momentum plays”. Additionally, the time limit for games as cut from seventy to sixty minutes to relieve “fatigue injuries”. These changes all provided an avenue to a more openly played game yet no change would become more important for the progression of football than the forward pass. Legalizing the forward pass revolutionized the fundamentals of the sport by adding a new way to move the ball downfield. More importantly the forward pass opened play of the game from sideline-to-sideline thus limiting the risk of injuries from close quartered play akin to rugby.