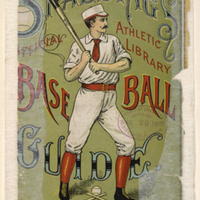 From 1889 to 1939 A.G Spalding and Bros. released a guide for the baseball fans to stay informed about the teams. 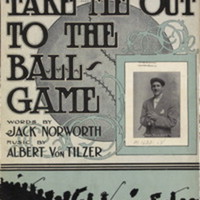 "The Sensational Baseball Song" An icon that still resonates through the sport today was created in 1910.

During the Gilded Age of America, disposable income increased and for various cultural reasons leasure activites became a significant part of the American cultural experience. Baseball quickly seperated itself from other sports and many other forms of entertainment. By the turn of the century, the sport had become known as "America's Pastime. 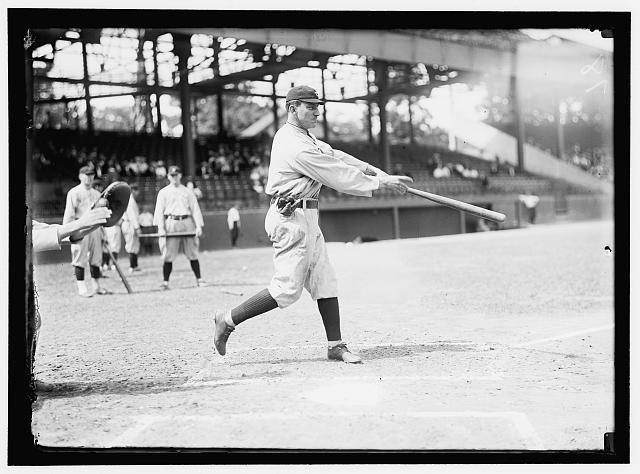 Baseball players at the turn of the 20th century were viewed as professionals of leasure and were percived to be playing the sport out of love for the game. During that same time period unskilled laboror were protesting and demanding higher wages from their employers because laborers across the country were demanding better working condtions as well as higher pay. Baseball was very similar because wealthy owners imparted poor working conditions on players. Additionally, owners had all the rights to retain a player at their original salary with a component of every National League contract known as "The Reserve Clause".

The reserve clause gave owners of teams first rights to resign a player to their original contract regardless of performance or popularity players no ability to negotiate their contract upon it's expiration date. Players would need to be refused by a team first before they could sign a contract with another team.

Nap Lajoie was the first player who spoke out against the reserve clause. He used his star power in the sport to help bring attention to the issue, and lobbied for owners to give some barganing chips to players. This did not occor.

Nap Lajoie moved to The American League along with many other players because they could be paid a great deal more money. National League commissioner and co-founder, Albert Spalding took these players to court in an attempt to challenge if the players had the legal ability to break the contracts.

Spalding additonally was working with The American League to formalize a merger of the leagues because both leagues were losing a lot of money on bidding wars for attendance as well as diluting attendance between the two leagues. They two sides came to an agreement before the court cases were finalized and with the merger came the introduction of the reserve clause on every contract between the two leagues. The case was irrelevent and Lajoie as well as many other players were forced back onto their original natNational League teams.

A number of cases took place between the merger of The American and National League all of which resulted in small steps won by the players to help improve their chances of breaking the reserve clause. It was clear that with both Federally legislative laws of The Sherman Act and The Clayton Act it would not take long to break the monopoly that was baseball. Many other monopolies had been broken up in different industries by the acts. In 1914 with the introduction of The Clayton Act, it had appeared that monopolies that consipired to create cartels like The National League and The American League to set contract prices, were of the past.

In 1920, the new Federal League of Baseball had risen to quick sucsess poaching the players of The National and American league with no reserve clause. The Federal League did not entertain offers of merging and were interested in retaining their players who had left The National League.

The National League challenged the legality of the clause again and eventually took the Federal League to the supreme court.

The supreme court ruled in favor of The National League claiming their reserve clause did not violate The Clayton Antitrust act because in the opinion of the court, “baseball did not violate interstate commerce and was therefore did not fall under the federal rule”. It highly disputed because the clause did act as a monopoly rule; The Federal League folded the next year because the National League contracts held up in court and players were forced to play for those teams.

The supreme court ruled in favor of The National League claiming their reserve clause did not violate The Clayton Antitrust act because in the opinion of the court, “baseball did not violate interstate commerce and was therefore did not fall under the federal rule”. It highly disputed because the clause did act as a monopoly rule; The Federal League folded the next year because the National League contracts held up in court and players were forced to play for those teams.

By 1922 labor protests were sweeping the nation to enact stable working conditions and beinfits as unions were strongly supported by the federal gonverment for the first time. 1922 was the year that The Clayton Act failed to recognize baseball as a monopoly, the only entitiy that would later be declared a monopoly that was allowed to opperate in The United States after the act was passed. Baseball was 20 years behind the labor progression that was taking place in the rest of the nation.

It was not until 1972 in the Supreme Court Case Kuhn v. Flood that the reserve clause was removed from baseball and the MLB was considered a monopoly.

← Kevin Fisher: Baseball's Reserve Clause
Immigration into the United States →
Sports
Adam Desai Labor Relations in Baseball at the Turn of the Century