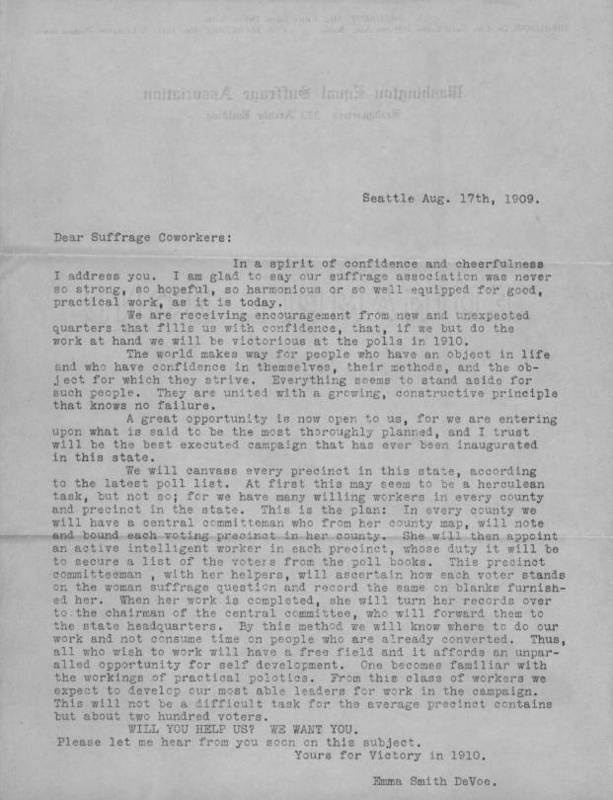 In the Progressive era, 1870-1920, Womens suffrage became a huge priority for women during this time; especially for the right to vote. Women of middle and upper classes created three groups that were most important to the women’s suffrage movement: the NAWSA, NWSA, AWSA and NWP.

The letter shown on the left was written by Emma Smith DeVoe, president of the Washington Equals Suffrage Association, to Homer H. Hill regarding the suffrage movement in 1909. This letter is an example of how the movement evolved from housewives to women demanding to have a voice when it comes to voting.

The main women in charge of the suffrage movement were Susan B. Anthony, Elizabeth Cady Stanton and Carrie Chapman Catt. Anthony and Stanton created the women's suffrage group NWSA (National Women's Suffrage Association).  This particular group urged for the women’s right to vote and they even urged for non-discrimination against women regarding pay and employment and even towards easier divorces. This group is based in New York and relied on a statewide network and drew in recruits.

The AWSA ( American Womens Suffrage Association) was a group founded by Lucy Stone and Julia Ward Howe in the Boston area. The group wanted to focus on changing laws state by state instead of changing the Constitiution. However, this group wasn't as popular as the NWSA. by the 1880s the group didn't get much support from women and male politicians. The leaders of the two groups thought that if they both combined, they would be able to make a better impact.

So, they created the group NAWSA (National American Woman Suffrage Association). This became the largest womens suffrage group in the Nation. Wyoming, Utah and Colorado were the first three states that adopted womens suffrage in 1893 and 1896. These states also recognized womens vote including Idaho. After these recognitions, the women started to look at different ways to catch attention.

The group decided that they were going to start doing public rallies. Some of the women even started taking their cause through the streets to spread the word and demand to vote. In 1908, the president of the group, Ann Howard Shaw, even led a parade down the street at Boone, Iowa with the Iowa Equal American Suffrage Association group. The NAWSA continued to rally and lobby for rights when things started to look up for the suffrage movement

The women continued to spread NWSA supporters across 5 different states: Oregon, Arizona, California, Kansas and Washington. The group had good luck in Illinois and later in Montana. These women showed that they could make great strides towards women's rights but there was still some work that needed to be done until women could have full-on voting rights in all the states.  A women named Alice Paul, a Quaker activist, formed a new party called the National Woman’s Party. With this group she was determined to win an amendment to the U.S Constitution that would grant suffrage rights women without the need for struggling state-by-state.

The group wanted to stand out even more, so they started to picket in front of the White House. After several arrests of women and their non-stop push for womens rights; Woodrow Wilson finally gave in and he endorsed women’s suffrage in September 1918 and Congress adopted the nineteenth amendment that was ratified in 1920. This was the final victory for women to vote.