German and Scandinavian Immigrants in the American Midwest 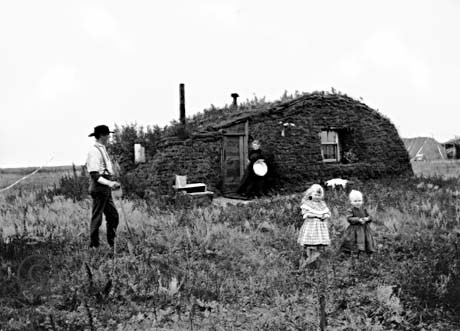 A Norwegian immigrant family on the North Dakota plains, c. 1880.

During the intense period of migration lasting from 1880 into the 1910s, German and Scandinavian immigrants were somewhat of an anomaly. In contrast to most pre-Civil War immigrants, the majority of new arrivals to the United States during this time period were coming from Central, Southern and Eastern Europe, nations that had not previously been well represented in immigration to the United States. However, there were still a few countries in Western and Northern Europe that contributed a fair amount of immigrants; namely Germany, Denmark, Norway and Sweden.

The Scandinavians and German immigrants did not only differ from other groups by where they arrived from, but also where they chose to settle. An overwhelming majority of immigrants during the 19th and early 20th Centuries chose to settle in America’s larger cities once they arrived in the country, but the Germans and Scandinavians flocked to the rural Midwest instead. This was particularly true in Wisconsin, Minnesota and the two Dakotas, where they became either a plurality or majority in most counties within decades. As a testament to their influence in the region, there are over 400 place names in Minnesota alone of Scandinavian origin.[1] Similarly, North Dakota’s capital city bears the name of Germany’s famous chancellor, Otto von Bismarck.

One might question why, in the face of such largescale urban immigration, the Germans and Scandinavians would choose to settle in the underdeveloped American countryside. The answer can be found by examining the countries, and places therein, that these immigrants arrived from. The Scandinavian countries were each largely rural before the 1900s, with very few industrialized cities, and a large, fast-growing rural population. In fact, Norway’s population doubled between 1750 and 1850, causing an astute shortage of arable land for agriculture.[2] This is what spurred Scandinavian migration to the United States, where these men and women took to the Upper Midwest in search of land they could claim as their own. Unlike Scandinavia, 19th Century Germany was already heavily industrialized, but it also contained a large, impoverished rural population. Thus, while German immigrants came from several different backgrounds, a significant portion of them still arrived in America in search of land for agriculture.[3]

By arriving in the Great Plains and Midwest, both German and Scandinavian immigrants would come to take part in a uniquely American tradition, the taming of the frontier. Like their American counterparts, neither group would hesitate when dispossessing Native Americans of their rightful lands, in order to further white civilization.[4] Likewise, many German and Scandinavian families also resorted to living in sod homes, constructed from bricks of dirt cut from the earth, as they attempted to establish an agricultural economy in the undeveloped regions of North and South Dakota. Because of this, Germans and Scandinavians also quickly adapted to the individualistic mindset of their American neighbors, as demonstrated by this letter from Barbro Ramseth, a Norwegian immigrant: “We have worked very hard since we came to America, and there is no other way here. If you want to get along, you have to do it yourself, you can’t hire help on a little farm.”[5] 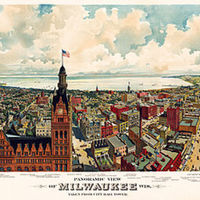 A view of downtown Milwaukee, Wisc. c. 1898. Milwaukee was seen by many as the center of German-American culture in the Midwest. Take note of the German-inspired architecture of the city hall building.

Aside from their agricultural contributions, Scandinavians and Germans would also actively take part in the politics of their new home. In some instances, political participation was a necessity, in order to maintain and protect cultural traditions from the homeland. This was the case for German immigrants, whose arrival into the United States coincided with a notable resurgence of the temperance movement, which called for the prohibition or regulation of alcohol. This movement was largely led by old stock Anglo-Saxon Americans, who were suspicious of the German immigrants’ love for beer halls, lagers and Sunday picnics.[6] Interestingly this conflict over alcohol set the German immigrants against their Scandinavian neighbors, who generally supported progressive Republicans calling for prohibition.[7] In response, Germans mostly supported moderate Republicans or Democrats, and participated avidly in anti-temperance movements, such as the National German-Alliance, which also promoted German culture within the United States.

During the heyday of their immigration period, German and Scandinavians would come to be the dominant ethnic group in many Midwestern states, including Wisconsin, Minnesota, North Dakota and South Dakota. Because of their large numbers, they were able to establish self-sustaining communities that supported their home languages, which were used in schools, churches and everyday business by the immigrant communities. This was particularly true of the German and Scandinavian Lutherans, who brought the religious traditions of their home countries into the United States.[8] The influence of these immigrants’ languages also carried over into the American press. By 1900, there were 613 German language newspapers published in the United States, and 115 in various Scandinavian languages.[9]

As America entered the 20th Century, native born Americans became increasingly more suspicious of the immigrants, particularly those that retained their own cultural traditions. Former president Theodore Roosevelt exemplified this sentiment as he spoke in 1916, saying “The one absolutely certain way of bringing this nation to ruin, of preventing all possibility of its continuing to be a nation at all, would be to permit it to became a tangled of squabbling nationalities, an intricate knot of German-Americans, Irish-Americans, English-Americans, French-Americans, Scandinavian-Americans, or Italian-Americans, each preserving its separate nationality, each at heart feeling more sympathy with Europeans of that nationality than with the other citizens of the American Republic.”[10] Following Roosevelt’s sentiments, and in the face of America’s entry into World War One, Germans and Scandinavians each experienced hostility and discrimination from native born Americans. As such, the two groups began to assimilate into mainstream American culture, letting go of their language and many of their traditions in the process. Today, German Americans constitute the largest single group within the United States, but they are virtually unidentifiable from other Americans, much like their Scandinavian counterparts.

[2] Kenneth O. Bjork. “The Norwegians in America: ‘Giants of the Earth” in The Immigrant Experience in America. (Boston: Twayne Publishers, 1976) 63.

[3] Frank J. Coppa and Thomas J. Curran. “From Rhine to Mississippi…” in The Immigrant Experience in America. (Boston: Twayne Publishers, 1976) 54.

[5] Solveig Zempel, ed. “A Family Moves to Wisconsin” in In Their Own Words: Letters from Norwegian Immigrants. (Minneapolis: University of Minnesota Press, 1991) 126.

[6] Coppa and Curran. “From Rhine to Mississippi…” in The Immigrant Experience in America. (Boston: Twayne Publishers, 1976) 54.